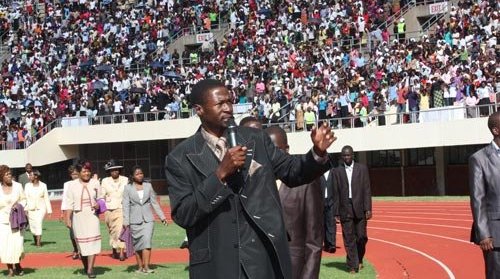 Prophet Emmanuel Makandiwa, the popular leader of the United Families International (UFI), who left the country amid claims he was wanted by police and telecommunications authorities, has returned home.

Post and Telecommunications Regulatory Authority (Potraz) bayed for his blood over a “spiritual” airtime project he launched weeks before leaving for the United Kingdom. The 34-year-old prophet, who has made headlines with his “healing” powers, spent more than three weeks outside the country.

According to his aides, he had gone on holiday with his “spiritual father”. Makandiwa touched down in the country yesterday morning and was whisked away in head-of-state-style to the City Sports Centre where the church holds its services.

Clad in a black suit and a white shirt, Makandiwa gave “spiritual” guidance to thousands of congregants who had come to receive their Sunday “blessings”. It was all smiles from the church’s faithful who had waited for more than three weeks to witness the return of the man who has taken part of the Pentecostal church by storm.

The news that he had fled the country had triggered panic and palpitations amongst his strong followers who reacted indifferently to the allegations. The followers who attended yesterday’s service could not hide their joy at their “father’s” return as they gladly hoisted flags emblazoned with the message “Welcome back Papa.”

The return of Makandiwa provides a sterner test for Potraz which said it would quiz and/ or hand him over to police for “violating” its rules. Potraz officials disclosed yesterday that it was good that Makandiwa was back as this would help them in their bid to get a full understanding of how the spiritual airtime juice card initiative operated.

One Potraz official said that Makandiwa would help them clear the air over the project “as he is seemingly more knowledgeable about the whole issue. For now, we are not going to speak to the media about our findings not until we engage the responsible entities and discus with them the results,” the official told the Daily News.

The Daily News is reliably informed that police have opened a docket against the “man of God” after Pascal Nyasha accused him of “fraud” saying he “stole” the idea of the airtime business without his consent Makandiwa’s story can be aptly described as a “from rags to riches” tale.

He grew up in humble backgrounds in Muzarabani, joining the great trek to Harare where he later became one of the most followed pastors in the country. Daily News