Police investigations into the suspicious death of retired army General Solomon Mujuru have entered the second week amid reports that investigators are still reconciling evidence. Mujuru died in a fire at his Alamein Farm two weeks ago. He was declared a national hero and buried at the National Heroes Acre.

According to Chief police spokesperson Senior Assistant Commissioner Wayne Bvudzijena the investigating teams are yet to submit reports to the Police General Headquarters. Bvudzijena said “There is nothing significant to talk of yet as reports are still being reconciled.”

Meanwhile Vice President Joice Mujuru says she will continue emulating the works of her late husband. Speaking to a delegation from the United Methodist Church at her residence yesterday, Mrs Mujuru said she would not give up the good works that her late husband was doing.

“A real soldier should be found with a bullet in the front to show that you were fighting, that is what I have decided to do. Handisi kuzodonhedza mukombe kana kuti baton stick yanga iina VaMujuru. People have given testimonies about what kind of a person he was and I am going to emulate that,” she said. 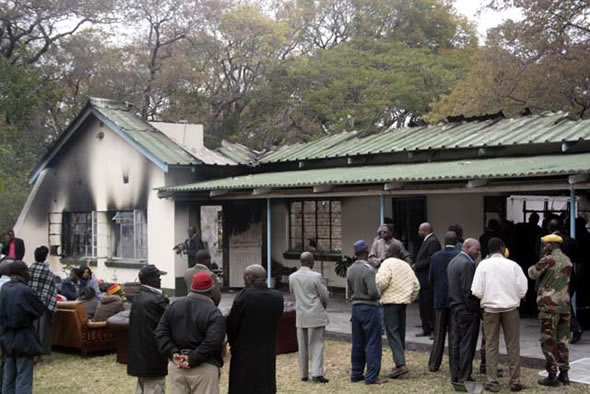 TUNNED…Some of the people who visited Retired General Solomon Mujuru’s farm residence soon after the inferno in which the former army chief perished mill around the gutted farmhouse.

VP Mujuru said it was important for the church to visit people who would have lost their loved ones so that they would not feel lonely. She said they were still waiting for the outcome of investigations into Gen Mujuru’s death.