An expected crowd of 3000 will be treated to an intimate gig at Prince George’s Playing Fields in Raynes Park by one of UK’s brightest young pop talents this Saturday 27 August 2011. Zimfest London 2011 will be Tinashe’s second appearance on the Zimfest stage having made his debut in 2010.

Speaking from his studio where he is working on his second album, the pop sensation said:

“Here in the UK, Zimbabweans of all walks of life look forward to this one day festival as a chance to enjoy and celebrate everything Zimbabwean.“Zimfest is a great festival that is very close to my heart. The people there have an amazing energy; there is great food, lots of fun activities on and above all great music. I’m really looking forward to it,” Tinashe added.

South Africa’s DJ Zinhle among artists to perform at Zimfest… 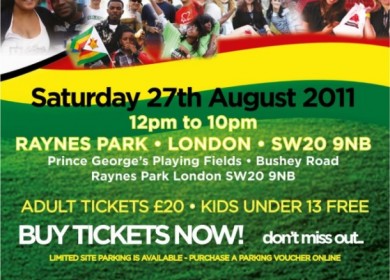 The event which is in its 11th year has been a fixture for Zimbabweans and South Africans in London, providing what can best be described as home away from home with live music, DJs, full bar and catering with traditional Southern African food, rugby, soccer, a Southern African market and children’s entertainment. This year, the organisers are raising funds through a Just Giving Appeal; to the East Africa Crisis appeal of the British Red Cross.

On the sports fields teams representing Zimbabwe, South Africa, Australia, New Zealand, Kenya and England will take to the pitch to compete for the Annual Zimfest Sevens trophy sponsored by Saracens Rugby Club and supported by The Springbok Supporters Club and Konno sportswear, the official kit makers of the Zimbabwe National Sevens team.

Philip Chalmers, a spokesman from the English Rugby premiership giants Saracens, said: “Saracens are pleased to support Zimfest. As the English rugby club of choice for expatriates from Southern Africa, we look forward to welcoming new supporters to our matches at Vicarage Road, Watford and at Wembley stadium – details at www.saracens.com”

Fest footballers will take up the Play it Safe Challenge in a five a side tournament organised in partnership with the Terence Higgins Trust as part of their campaign to raise awareness of sexual health issues.

Terrence Higgins Trust’s Health Improvement Specialist for African Communities, Marcy Madzikanda, said: “We’ll be raising awareness of sexual health issues, encouraging testing and explaining the negative health impacts of late HIV diagnosis, which is something that remains problematic within this community. We’ll also be handing out free lifestyle resources and products that will help people safeguard their health and wellbeing and that of their families”.

Zimfest is held in no less than 6 cities on 4 continents and is rapidly becoming one of the most recognisable and authentic African events. The organisers will also be using the London event to help raise funds for the British Red Cross to assist in their efforts in dealing with the crisis in East Africa.

Zimfest is a community development project started and run by UK based Zimbabwean Charity WEZIMBABWE. It is open to anyone who likes a good braai, good music and sport, the cornerstones of Southern African culture, and is a unique opportunity to show some love for Africa in a fun and family friendly environment.