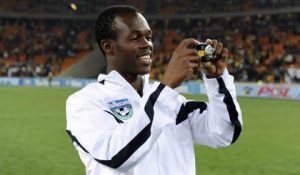 Knowledge Musona’s proposed move to Europe took a new twist Tuesday with the Zimbabwean hotshot saying he wasn’t aware of any links to Scottish giants Glasgow Celtic and a transfer to German side Hoffenheim was still “50-50.”

Until now, Musona’s move to the German Bundesliga had appeared cast in stone with the only hitch being the small matter of the value that Hoffenheim have to pay Kaizer Chiefs for their best player.

Kaizer Chiefs manager Bobby Motaung even mentioned that Celtic were in the race to sign Musona. But the situation is changing rapidly, amid reports that Hoffeinheim, angry that they had been dragged into an auction when they were the first club to agree to sign the player in principle, had halved their offer from R15 million to about R8 million and told Chiefs to either take it or leave it.

On Tuesday Musona told KickOff, in a video interview, that he was unaware of the offer from Celtic and was not even upbeat about his chances of moving to the German club saying it was a 50-50 situation. Kick-Off/Mtnfootball

Khama Billiat back in full training… named in squad…

Import on duty on some food stuffs restored