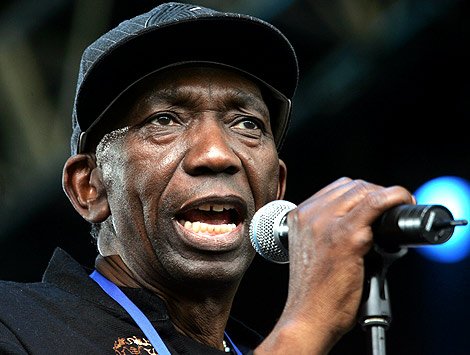 Last week I received an unusual phone call from United States-based Chimurenga music guru Thomas Mapfumo aka Mukanya whom I had last interviewed way back in 2001. It was a surprise call, and it came when I least expected it. Efforts to get in touch with the fiery music star had collapsed over the years.

Mukanya had phoned basically to clear the air over issues raised through the Daily News and Daily News on Sunday. The call came as a blessing to our readers, including myself as everyone was eager to hear from the guru himself. And true to form, the singer gave his side of story, blaming the police for the disappearance of his four luxurious cars and shouting at the Daily News reportage.

If Mukanya had been in the country, he could have visited us at the office and spat at our faces. In the past when he still lived in Zimbabwe, a number of entertainment journalists both in the state and independent media had a brush with the music star every time they wrote something he did not agree with.

Be ashamed of yourself: Thomas Mapfumo tells ED after murder…

Mapfumo is open and always says his mind, in interviews and through his music. His arrow is always pointing at the big ace and rarely brings riddles to his messages. Speaking to Mukanya,  was interesting to note that the musician feels Zimbabweans were cowards who have over the years failed to remove Robert Mugabe from power.

Mukanya has even gone further to release a song in which he chides Zimbabweans as “mbwende”. But if I may ask, who is Mukanya to call us “mbwende” when he in fact ran away from the “struggle”? The people Mukanya refers to as “mbwende” were actually brave Zimbabweans who for years have weathered Zimbabwe’s stormy waters while he basks in “real” life in America.

The musician is one person who should not have had the courage to insult those who have stayed back in Zimbabwe and fought head-on the system. Morgan Tsvangirai was brutalised by the police; Nelson Chamisa was attacked and left for dead at the Harare International Airport; Jestina Mukoko was abducted and tortured; opposition ministers are  arrested everyday on flimsy charges; Woza members are routinely arrested and so are NCA members.

Protest musicians have had their music blacklisted while others have clashed with political supporters because of the music. Journalists have been detained over stories. Can Mukanya actually tell off all the aforementioned people and call them “mbwende”? Mapfumo should be reminded that Zimbabweans are a brave lot who for years have been resisting undemocratic rule.

The unity government that we have today came after a protracted negotiation by Zimbabweans and as far as we are concerned, a stitch in time serves nine. Today Mapfumo is what he is because of the support he received from ordinary Zimbabweans who bought his music and attended his shows.

For the singer to say the Zimbabwean issue was to him just “a drop in the ocean” is but insulting our intelligence. He says his war was global and that he now concentrated on solving international issues. Really? We have a “war” going on in Zimbabwe and we as Zimbabweans will continue to fight that “war” with or without Mapfumo.

It is almost 10 years now since Mukanya relocated. We have been doing quite well with those musicians who have remained in the country. Zimbabwe is bigger than Mapfumo and it is actually him who is a drop in the ocean in as far as his contribution has been to our struggle. And he laughs at us saying that he was not expected back home where “there are no street lights and electricity”.

My foot , what cheek Mukanya!

Originally published in the Daily News

Be ashamed of yourself: Thomas Mapfumo tells ED after murder of Chamisa supporter