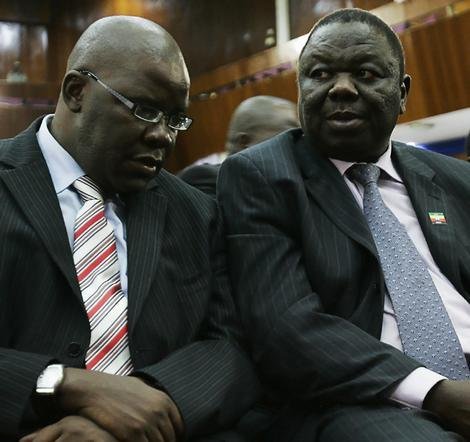 Zimbabwe’s dreaded state security agency, the Central Intelligence Organisation (CIO), has come up with a plan to expose real and imagined sexual escapades of top leaders of the two MDC formations as part of a systematic campaign to rescue President Robert Mugabe from defeat at the polls.

An extensive briefing of the Sunday Times by intelligence sources shows that the CIO has hatched a plot to expose and possibly destroy the MDC politicians through sex scandals.

Sex scandals have brought down many politicians, movie stars, football stars and musicians all over the world. Former US president Bill Clinton, US golf superstar Tiger Woods and SA President Jacob Zuma are some prominent personalities whose reputations have been ruined by such revelations.

The three have already been “exposed” in the state-controlled media over alleged sexual goings-on which they are still battling to clear. Last Sunday, Biti’s story was splashed on the front page of the mass-circulating government-controlled Sunday Mail. The newspaper has in the past also carried reports of alleged sexual activities of Tsvangirai and Ncube.

The Sunday Mail editor, Brezhnev Malaba, now based in Harare, was also in charge when another state daily, The Chronicle, exposed the alleged sexual misdemeanours of former Bulawayo Catholic Archbishop Pius Ncube in 2007. The cleric, a fierce critic of Mugabe, had his career ruined after that.

“There is a well-organised CIO plan to expose MDC leaders and prominent critics of Mugabe and Zanu-PF over their private sexual activities,” a CIO officer said. “The plan is already being rolled out. There are many people targeted, depending on their positions, circumstances and CIO objectives.”

Intelligence officers said the CIO believes in destroying politicians’ reputations through scandals including honeytraps, one of the most frequently used methods to nail opponents.

A senior CIO officer experienced in honeytraps said MDC leaders were “vulnerable because they are all over the place due to their new positions in government, status and wealth, coupled with their naïvety about how the state works”.

Biti was left reeling this week after the Sunday Mail reported that he was “embroiled in a messy office romance with a desk economist in his ministry”. The paper named Biti’s lover as Petronella Chishawa. Her husband, businessman Caesar Matandirotya, took legal action and they are now separated. Biti made muted public denials of the story, preferring to let his lawyers deal with it.

A few months ago Tsvangirai was at the centre of a storm over an alleged affair with Bulawayo woman Aquilina Kayidza Pamberi. It was reported that her husband, Jacob Mandeya, divorced her because of the adulterous affair, although Pamberi insisted that domestic violence caused the marriage breakdown. Tsvangirai has also been accused of impregnating another Bulawayo woman, Loretta Nyathi, daughter of top football commentator Inglam Nyathi.

The premier, whose wife Susan died in a horrific accident in 2009, has been linked to other women, including his wife’s sister Leah Mhundwa, Dr Arikana Chihombori and Harare businesswoman Locadia Tembo.

“These things are not happening by coincidence, they are planned,” a CIO officer said. “Towards the elections there will be a string of sex scandals mainly involving MDC leaders. Just watch this space.” Sunday Times