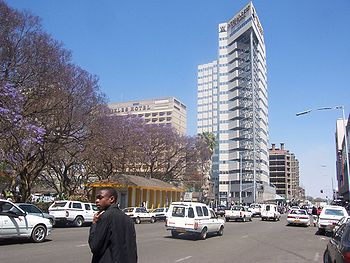 A HARARE magistrate has referred to the Supreme Court the case in which Information Communication Technology Minister Nelson Chamisa is being charged with reckless driving to determine constitutional issues he is raising. Chamisa, who is being represented by Mr Chris Mhike of Atherstone and Cook, appeared before magistrate Ms Paidamoyo Mukumbiri.

He had made an application to have his case referred to the Supreme Court arguing that his rights were infringed. In her ruling Ms Mukumbiri said Chamisa was entitled to a fair trial within a reasonable time limit and any hearing now would be highly unfair and prejudicial to him. She said although prosecutor Mr Nathaniel Chigoro had submitted that the witness who was supposed to testify in the case was outside the country, he did not show the court evidence that the witness was away.

This, he said, caused the delay complained of by the defence. The defence said it took the State two years to bring Chamisa to court adding that he should not be punished because of the shortcomings of the State. After the ruling Mr Mhike said the referral would enable him to illustrate to the Supreme Court, the ways in which his client’s rights have been violated by the State.

“We are hopeful that justice will be done as we take his matter to higher courts of law . . .,” he said. Mr Mhike praised the lower court for “exhibiting fairness” in the application. In his application Mr Mhike had argued that bringing his client to court two years after the incident took place was politically motivated. “It was an inordinate delay on the part of the State in instituting the prosecution for an accident that happened two years ago. It is certainly out of the ordinary.

Chamisa dismisses reports they are talking to Zanu PF about…

Chamisa says – ‘Zimbabweans are suffering at the…

“Judging by the manner the papers were furnished in the State outline, this is a rushed prosecution,” Mr Mhike said. Mr Chigoro alleges that Chamisa caused an accident in January 2009 along Sam Nujoma Street due to negligence causing “minor damages” to two vehicles.

It is alleged that on January 16, 2009 at about 1:10pm all three parties in question were travelling north along Sam Nujoma Street in the same lane. The first and second parties reduced speed at the intersection of Sam Nujoma Street and Natal Road as there was a vehicle ahead turning right. Chamisa, it is alleged, hit the first car from the rear and due to the impact that vehicle hit the car in front of it.

Mali are not Barcelona: Duvillard

Chamisa dismisses reports they are talking to Zanu PF about GNU

Chamisa says – ‘Zimbabweans are suffering at the hands of bad…