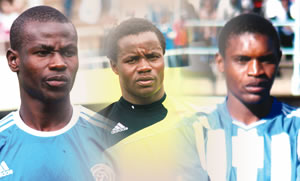 THREE Dynamos players – Washington Arubi, David Kutyauripo and Guthrie Zhokinyi – were on Wednesday questioned by detectives from the CID Fraud Squad in Harare as part of investigations into the Warriors’ controversial trips to Asia.

The trio was picked from the club’s training session at Raylton Sports Club in the morning and, after a brief questioning session during which statements were recorded, was released.

The players rejoined their teammates shortly before Dynamos completed their training session for the day. Detectives arrived at the club’s training ground and spoke to the technical team led by coach Lloyd Mutasa. Shortly, the detectives left the training ground, accompanied by the players, to their offices at Ahmed House in the capital where the statements were recorded.

The best ZIFA president we never had

Exploring the nexus between Majaivana’s music and Bosso…

Dynamos assistant coach Masimba Dinyero said the detectives told them they wanted to record the players’ statements and he believed it was related to the games they might have played in Asia. CID national spokesperson Detective Inspector Augustine Zimbili said he was not aware who had picked the players and could neither confirm nor deny that the players had their statements recorded over the Asiagate.

“I have spoken to the officer-in-charge, but I am not sure who has picked up the players. So I cannot confirm or deny, but will possibly look further if given more time,” said Zimbili.

However, sources said the players were questioned over the unsanctioned trip by the Warriors to Thailand and Malaysia in December 2009.
“The players said they were asked what happened during the tour to Malaysia.

“It was just a brief interrogation and they were released,” said the source.

It is understood that the police are also keen to question more players as part of their investigations into Asiagate. Some of those players include Warriors’ skipper Method Mwanjali, who was due to be questioned before the trip to Mali in March, and is now likely to give his statement when he returns home for the off-season break.

The police interest in the case might also have been sparked by a dossier that was sent to Interpol by the Zifa investigating team, led by Ndumiso Gumede, who were asking for help to deal with the case. Fifa’ s Anti-Corruption unit is next week expected to question Football Association of Malaysia officials, as part of a global investigation into match-fixing and illegal gambling on matches.

FAM officials claim that Monomotapa’s controversial tour to that country, where they were disguised as the Warriors, could be part of the agenda when the Fifa team visits. There has always been suspicion that the FAM authorities work closely with match-fixing agents and illegal gamblers, which makes it possible for them to arrange international friendlies, featuring the Malaysian national team.

The investigations by the world football body came after Fifa president Sepp Blatter said on Monday that football’s world governing body would be injecting US$28 million to Interpol to fund a dedicated anti-corruption unit in Singapore to help fight against match-fixing.

Interpol secretary-general Ron Noble told Fifa in Zurich that Asia was “a hotbed of betting and match-fixing”.  German authorities say there are more than 300 matches, in their country alone, which are under investigations.

“The threat of match-fixing in sport is a major one, and we are committed to doing everything in our power to tackle the threat,” said Blatter.
“In the fight against illegal betting and match-fixing, the preventive measures that can be taken and the protection of the players and the integrity of the game are of the utmost importance.

“Joint work with the authorities and with Interpol is crucial for success, and for this reason we are very pleased to announce this contribution, which will further enhance our co-operation (with Interpol).” Zifa investigators believe Singapore national, Wilson Raj Perumal, was the central figure in what they suspect to have been a match-fixing and betting scandal that involved the Warriors during tours to the Far East.

Perumal is currently languishing in jail in Finland, awaiting trial on a number of cases involving match-fixing and immigration violations where he allegedly entered the country under false identity, and has turned into a key figure in Fifa’s investigations.

Zambian striker Christopher Musonda, who represented the African country at Under-23 level, and five other players were arrested in Finland on charges that they were manipulating the results of matches.

The best ZIFA president we never had