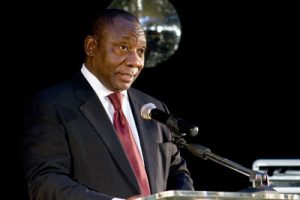 The independent Radio VOP is reporting that ZITF bosses refused to comment on the “sensitive’ issue and only said Ramaphosa was “busy” and could not attend.

Little-known Johnny Smith, Chief Executive of Walvis Bay Corridor from Namibia is said to have replaced him.

WATCH: Zuma speaks for the first time, pleads with people to…

There is also a suggestion in the report that Ramaphosa had never agreed to be the guest of honour and that in fact the advertisement was sent out “prematurely”.

The annual trade fair has been struggling over the past decade because of the country’s bad investment image fuelled dominantly by human rights abuses and lack of respect for property rights by the Mugabe regime.

Ramaphosa says no one can be forced to be vaccinated

Ramaphosa admits rampant state graft while he was VP