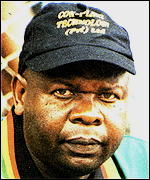 ZIFA technical director, Nelson Matongorere was hospitalised after suffering complications with his appendix last week. Matongorere was admitted at a local hospital on Tuesday and underwent surgery on Wednesday.

His wife Elizabeth confirmed that the ZIFA technical director was still in hospital. “He had an appendix problem and was admitted on Tuesday at a local hospital. He was operated on Wednesday and the operation was successful.

“He is still in hospital but he is in a stable condition. He started feeling the pain when he was in Masvingo last Friday and the situation got serious when he came back home on Monday and we took him to hospital where he was admitted but he is recovering now,” said Elizabeth.

Elizabeth said they were not sure when he will be discharged from hospital as he was still under observation. We do not know yet when he will be out, he is still in hospital and the doctors are still observing him,” she said.

Matongorere was appointed a Fifa instructor of coaching in 2009 after he successfully completed the Futuro Level Three course in Swaziland in 2008.

There were 12 instructors from SADC region who attended the course and Matongorere was one of the five who were recommended by Fifa to become regional instructors.