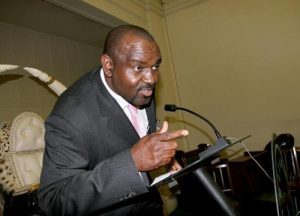 Even the numbers failed to work in favour of the former ruling party as its 98 MPs did not vote together. Two of them opted to vote for the MDC-T, which – with the support of the MDC-N MPs – would otherwise have gained 103 votes.

The MDC-T had the full backing of Welshman Ncube’s party, which on Monday threw its full support behind Lovemore Moyo in bid to stop Zanu PF’s rigging machinations that involved imprisoning MDC-T legislators ahead of the polls.

Zanu PF employed clandestine tactics in an attempt to win the coveted seat now in the hands of the Prime Minister Morgan Tsvangirai’s party. It tried to bribe MDC MPs with cash amounting to $25 000 as well as promises of prime farms and posh cars.

“Five of our MPs received $5 000 from a coordinator of the syndicate, a Senator Gaule, which they quickly handed over to Hon Innocent Gonese and Hon Dorcas Sibanda, the MDC chief whips, as the evidence of the scam. We are in possession of $25 000 which our MPs have surrendered,” said Gonese.

Zanu PF supporters hammer Mugwadi for being “toxic and…

Gonese added that the MDC has names of 10 more MPs who were lured with the bribes which party Spokesperson Nelson Chamisa described as ‘dirty money’.

At the end of the day Zanu PF/MDC triumphed in a poll that many regard as harbinger of elections to come. The Speakers’ Gallery was packed and several journalists who did not have Parliamentary accreditation cards were turned away.

The drama did not end up with journalists and members of the public being turned away but also saw top Zanu PF official Andrew Langa hurriedly making it to the August House without identification documents and only the timely intervention of Parly clerks saved the day for the Zanu PF legislator who managed to cast his vote unlike the MDC-T MPs who remained incarcerated on the day.

MDC-T supporters broke into dance and jubilation when the announcement was made and the riot police was at hand to deal with the celebrating youths.

The presence of menacing police did not dampen the excitement of MDC-T supporters but was enough to see wanted MDC-T MPs quickly disappear after the announcement as they were afraid of arrest.

Even the roping in of Oppah Muchinguri and Rugare Gumbo to add numbers to the Zanu PF train did not change matters. Significantly, today  March 29 is  the day that MDC beat Zanu PF three years ago in the synchronized elections.

A disgraced Jonathan Moyo, who dangled gifts to MDC-T legislators in order to vote for Khaya Moyo, fled from journalists after they confronted him. The Zimbabwean

‘Election season has started’: Civil servants to get bonuses in USD$

Zanu PF supporters hammer Mugwadi for being “toxic and insensitive”