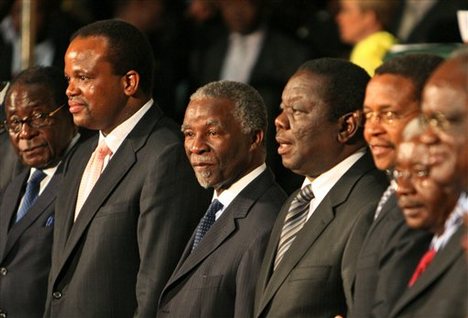 For the past four days, I have been meeting fellow SADC leaders to appraise them on the dire situation in Zimbabwe, which has posed a serious threat to the GPA and the inclusive government.

In the past week, I have held discussions with President Rupiah Banda of Zambia, President Armando Guebuza of Mozambique, King Mswati 111 of Swaziland and Botswana President Ian Khama about the need for urgent action on Zimbabwe to ensure the security of persons and a peaceful environment in the country.

I will soon be meeting the facilitator, President Jacob Zuma, over the situation in the country. I have told these fellow leaders that the time for SADC to act and deliver is now. And we are all agreed that Zimbabwe should not be allowed to decelerate into an implosion.

I have told the SADC leaders of the renewed siege mood in Zimbabwe, the arbitrary arrests, the crackdown on democratic forces in the country and the culture of impunity that is seriously threatening the health and the life of the inclusive government.

I have told my fellow colleagues in the region that this country risks sliding back to the chaos of 2008; the chaos which the same regional leaders mitigated by nudging all the political players to form an inclusive government in the national interest.

But today, the violence machinery has once again been unrolled in the countryside, the culture of impunity has worsened and the past eight weeks have seen an intensification of the crackdown on the democratic forces in the country.

While I was away in the last four days, it appears the civilian authority is no longer in charge and dark and sinister forces have engaged in a hostile take-over of running the affairs of the country, with or without the blessing of some leaders of the civilian authority. Together with civic society and other democratic forces, we had planned to hold a major peace rally in Harare tomorrow to pray for peace in the country.

We had duly notified the police as required by law. I was told yesterday that the police have refused to allow that peaceful rally to proceed, against the provisions of the law and the letter and spirit of the GPA. There has been an instruction from the Police Commissioner-General to effectively ban meetings when there is a Cabinet decision that no meetings should be banned.

The MDC notes that unless the region nips this tension in the bud, we could easily slide back to the dark days of 2008, a development that is not welcome to any Zimbabwean across the political divide.

SADC, as the guarantors of this agreement, has to play a critical role in ensuring that we all respect the signatures that we appended to the GPA. We have to implement all the agreed issues and usher in political, economic and media reforms as stipulated in the GPA in order to enable the country to transit peacefully to a credible and legitimate government whilst SADC should monitor every step of this process.

We are all agreed that the tenure of this inclusive government will have to lapse at some point and an election is inevitable. But it has to be a free and fair election devoid of the violence that has characterized electoral processes in the country for the past 31 years.

The SADC troika summit due to take place soon has to seriously address the issue of the roadmap so that all political players are bound by time-bound milestones and rules ahead of the next election. It is my sincere and fervent hope that the SADC region will not stand back and allow this impunity to graduate into full-fledged chaos.

The people want a guarantee that they will be allowed to vote for parties and leaders of their choice in a free environment. They hope that the guarantors of this agreement will ensure that their vote counts and that their vote will be protected.

Finally, I appeal to all peace-loving people and leaders of SADC, the African Union and the broader international community to HELP ZIMBABWE BY STOPPING THE VIOLENCE.