It was a British prime minister of the 19th century, Benjamin Disraeli, who said that there are “lies, damned lies, and statistics”, and that is the impression gained by this columnist from a recently published book, Zimbabwe’s Land Reform:  Myths and Realities, by Ian Scoones, Nelson Marongwe, Blasio Mavedzenge, Jacob Mehenehene, Felix Murimbarimba and Chrispen Sukume. 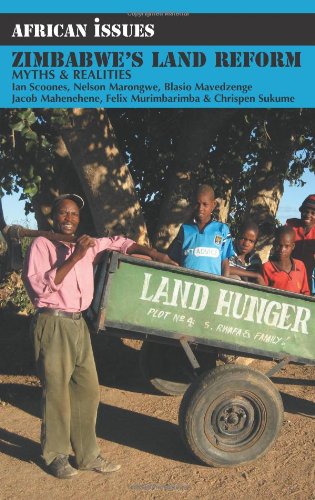 With funding partially provided by the United Kingdom’s Department for International Development (DFID), a group of British and South African professors conducted a study of Zimbabwe’s programme of land reform as pursued since 2000.

The researchers state that their aim was “not to deny what has happened, including some appalling violations and abuses”.

However, they add that “there is an enormous amount of confusion, misinformation and misunderstanding about what happened to whom, where, and with what consequences over the last decade, and a more nuanced story urgently needs to be told”.

Riots in Zimbabwe: Don’t mess with the informal sector

A lens into land, wildlife and elite politics in Zimbabwe

Eric Bloch – He Served Many: Obituary by Gideon Gono

To all intents and purposes, they conclude that there are five key myths on the land reform programme, being:

•Zimbabwe’s land reform has been a total failure;

•The beneficiaries of Zimbabwean land reform have, to a major extent, been politicians and those related or connected to the political hierarchy;

•There has been no investment in the resettled lands;

•Agriculture has been totally destroyed, and there is consequential intense food insecurity;

•Zimbabwe’s rural economy has been totally decimated and destroyed.

Scoones and his colleagues say that “by challenging these myths, and suggesting alternative policy narratives, we do not want fall into the trap of offering an unjustifiably positive picture.  We want instead to present the story as we have observed it on the ground: warts and all”.

However, they have blatantly not achieved their declared objective for they conclude that thousands of families who were recipients of land succeeded in establishing a base for themselves as serious producers “with the capacity to contribute significantly to Zimbabwe’s agricultural economy”.

They seek to reinforce this by stating that “today Zimbabwe has a radically altered agrarian structure”. In 1980, over 15 million hectares was devoted to large-scale commercial farming by around 6 000 farmers.

This fell to around 12 million hectares by 1999, in part through a modest but, in many ways, successful land reform and resettlement programme.  Today there are still five million hectares under large-scale farming, some of it in very large holdings”.

“There are perhaps only 200-300 white commercial farmers still operating, with most having been displaced, along with a substantial number of farm workers. Most land today is under small-scale farming, either as communal areas or resettlement.  Estimates vary, but around seven million hectares have been taken over through the land reform programme since 2000.”

The study acknowledges that there have been some major changes in agricultural production, with commodities such as tobacco, beef, horticulture, tea and coffee having been severely reduced in volumes under the implementation of the land reform.

It further notes that food production has diminished, with special reference to maize. But, notwithstanding the study noting these negative developments, it nevertheless concludes that, overall, land reform has been a success.

Its authors appear to have had no, or very little, regard to the huge economic prejudices attributable almost wholly to the land reform, and to the magnitude of blatant and contemptuous disregard for human and property rights, and law and order.

They note the significant numbers of Zimbabweans, and their families, who have been resettled, whilst ignoring that over 300 000 agricultural workers were rendered unemployed, rendering them and almost two million dependants poverty-stricken.

They similarly discount their own acknowledgements of the decline in agricultural production, to an extent that between 2000 and 2009:

•Tobacco production fell from 237 million kg to 45 million kg, (albeit very markedly increased in 2010 and 2011), and the consequential negative impacts upon essential foreign exchange generation.

•The national livestock herd has shrunk to about 35% of its 2000 level.

•Until 2 000, not only did Zimbabwe produce enough maize to feed the nation (1,8 million

tonnes), but also to export to such an extent that Zimbabwe was regarded as the regional breadbasket.

•Foreign investment was grievously deterred by Zimbabwe’s arrogant breaches of its Bilateral  Investment Promotion and Protection Agreements, by it determinedly failing to compensate the displaced farmers, and by fears that the State’s expropriation of the farms could well be a precursor to a future expropriation of urban properties and of businesses (recently such fears being reinforced by the enactment of Indigenisation and Economic Empowerment legislation).

•Hundreds, if not more, of former white farmers and their families were victims ofpronounced violence, wholly associated with the land reform programme, sustaining severe injuries and sometimes loss of life.

In conducting their study, the researchers concentrated heavily on Masvingo province.  They argue that “the Masvingo story  is more generally representative of the geographical majority of the country beyond the Highveld” (whilst admitting that it was in the Highveld that there was “the greatest disruption of high-level, politically-driven land grabbing” and “where the concentrations of election violence, particularly in 2008, were”).

And yet, whilst not disputing that Masvingo was a significant agricultural area, its overall contribution to Zimbabwean agricultural output prior to the land reform programme was a relatively small one, as compared to that of Mashonaland East, West, North and Central, Midlands, Matabeleland North and South, and Manicaland.

No matter how fervently some, including the study’s researchers, may contend that the land reform programme was not a disaster, the reality is that it was two disasters, being on the one hand the horrendously economic and humanitarian consequences and, on the other hand, that Zimbabwe did need a land reform programme, but one that was constructive and nationally beneficial, just and humane.

The programme pursued precluded such a necessary and desirable programme.

Eric Bloch is a respected economic commentator in Zimbabwe

Suicidal to have election in Zimbabwe this year

Riots in Zimbabwe: Don’t mess with the informal sector

A lens into land, wildlife and elite politics in Zimbabwe

Eric Bloch – He Served Many: Obituary by Gideon Gono