Gaddafi weighs up escape to Zimbabwe 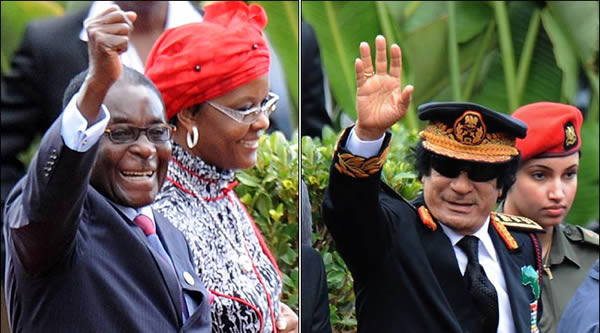 As the curtain draws on Libyan dictator Colonel Muammar Gaddafi and his 41 years in power, speculation has begun to swell on where he will seek refuge should the inevitable happens and he is toppled.

It was reported that airports around the Middle East were on Wednesday night turning away planes carrying members of Gaddafi’s family. Officials at Beirut Airport in Lebanon for example said they denied a request to allow a plane belonging to the Gaddafi family to land.

The plane is said to have been carrying Aline Skaff, the wife of one of the dictator’s sons, Hannibal Gaddafi. Another Libyan Arab Airlines aircraft carrying 14 people including Gaddafi’s daughter, Ayesha made an unscheduled appearance in Maltese airspace and was also refused permission to land.

It’s becoming clear Gaddafi does not have many options where he can get a safe haven and Zimbabwe is slowly emerging as a preferable destination our sources tell us. Already commandos from Zimbabwe and Cameroon are part of a group of African mercenaries helping him to stay in power and randomly killing civilians.

Gaddafi and Mugabe are close friends and Libya has in the past assisted Zimbabwe with fuel when shortages were crippling the economy. There were reports that a chartered Russian aircraft flew into Harare on Monday evening and left for Libya early Tuesday morning carrying troops from the crack Commando Unit.

Zimbabwe’s Defence Minister Emmerson Mnangagwa was confronted in Parliament over the allegations and he could neither confirm nor deny the reports. MDC-T Chief Whip Innocent Gonese quizzed him on the reports emanating from Libya and all he could say was “I have no mandate in my duty as Minister of Defence to investigate activities happening in another African country.”