Harare -The neglected widow of national liberation war hero and ZANLA commander, the late Josiah Magama Tongogara has approached Prime Minister Morgan Tsvangirai for assistance. Angeline Kumbirai Tongogara is believed to be struggling to make ends meet and wants the government to assist in looking after her. 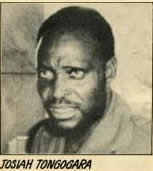 She met Tsvangirai on Tuesday at Munhumutapa Building and reportedly told the PM she was struggling to survive in the Dollarized economy. The 65-year old widow was hostile to journalists when she came from the meeting with the PM. She told off journalists waiting at the PM’s Office that they should have nothing to do with her.

“I have struggled and suffered for too long,” she yelled as she made her way out of Munhumutapa Building. Tsvangirai’s office said this was not the first time the widow had requested to have audience with the PM on the issue of her welfare.

“Yes, she met with the Prime Minister but the meeting was private and confidential,” the PM’s spokesperson, Luke Tamborinyoka told journalists at Munhumutapa Building. Tamborinyoka said this was Tsvangirai’s second meeting with the widow. He refused to comment further.

Relatives of the national heroes’ wife said she was struggling to make ends meet and was desperate to be assisted by the government. The relatives, who did not wish to be named, said the widow has failed to get joy from Zanu (PF) leaders including President Robert Mugabe whom she has met on several, occasions over the years.

The relatives said despite the starring and heroic role her husband played during war of liberation she and her family had not benefited anything from the “fruits of independence. She is living from hand to mouth unlike her husband’s comrades during the struggle,” said one relative. “She was not given a farm like others to sustain herself.”

They said the widow struggled to look after her five children with little or very minimal support from Zanu (PF) and the government. Her husband was the commander of Zanla Forces that waged an armed struggle to get independence from the colonial regime of the late Ian Douglas Smith.

He died on the eve of independence after he was involved in a mysterious accident on his way to Zimbabwe from Mozambique. Opah Muchinguri, his personal assistant, survived the accident. Muchinguri rarely speaks about the circumstances surrounding the accident, which claimed the life of the brave Zanla commander.

General Tongogara knew he was going to die before independence – Chiwenga