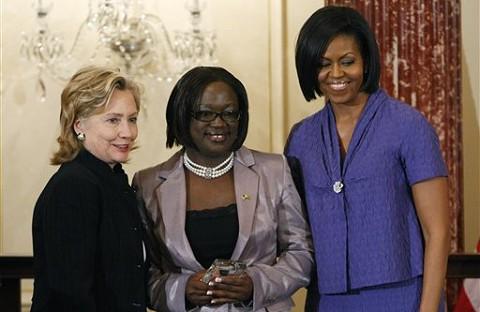 Mukoko was among 9 other human rights defenders honoured in Washington on Wednesday by the U.S. State Department which gives the awards to women who have demonstrated exceptional courage and leadership in advancing women’s rights.

US Secretary of State Hillary Clinton speaking at the awards ceremony said “We are honoring women from around the world who have endured isolation and intimidation, violence and imprisonment.”

“Many have even risked their lives to advance justice, freedom, and equal rights for everyone. Their stories remind us of how much work there is left to do before the rights and dignity of all people, no matter who you are or where you live, are respected and protected by the world’s governments.”

Mukoko was abducted by members of Mugabe’s state security agency in 2008 and severely tortured while being kept incommunicado. She was eventually brought to court in a farcical trial before the Supreme Court threw out the cooked up banditry case against her.

Ban on torture must have no exceptions

Joice Mujuru and the curious case of a dream deferred in…

Mukoko torturers to face the music

Speaking at the ceremony Michelle Obama said of Jestina  ‘she was abducted from her home, she was tortured, she was interrogated for hours while forced to kneel on gravel – all for the simple act of speaking out about the government’s human rights abuses.’

‘Yet, she emerged unbroken. And as she put it, “I came out of this experience not a bitter person, but a better person.” That is the thread, that’s the thread that runs through all of our honorees’ stories – that ability to draw strength from suffering, the determination to not just advance their own lives, but the lives of others, as well.”

In a tribute to the 10 honoraries, Mrs. Obama said: “That’s what makes these women so extraordinary – that they not only refuse to be victims of injustice and oppression, they also refuse to be bystanders.”

Ban on torture must have no exceptions

Mukoko torturers to face the music