Recession is Coming! What’s Your Strategy?

If you don’t have a strategy, congratulations, you are through to the final round to qualify to become the UK’s next Chancellor of the Exchequer. Even if you fail, don’t worry if you fail to make it because it means you automatically become prime Minister!

On a serious note, for ordinary people, (i.e. anybody whose job does not involve managing the financial affairs of a country or has responsibility for millions of livelihoods) there is no shame in not having a strategy because, if truth be told, even the British government itself doesn’t have a strategy – if it did, there would not be a recession in the first place.

So, let’s face it, the UK economy is facing grim prospects. Even the Bank of England yesterday afternoon (3rd November 2022) said the recession will be deepest and longest running in 100 years. 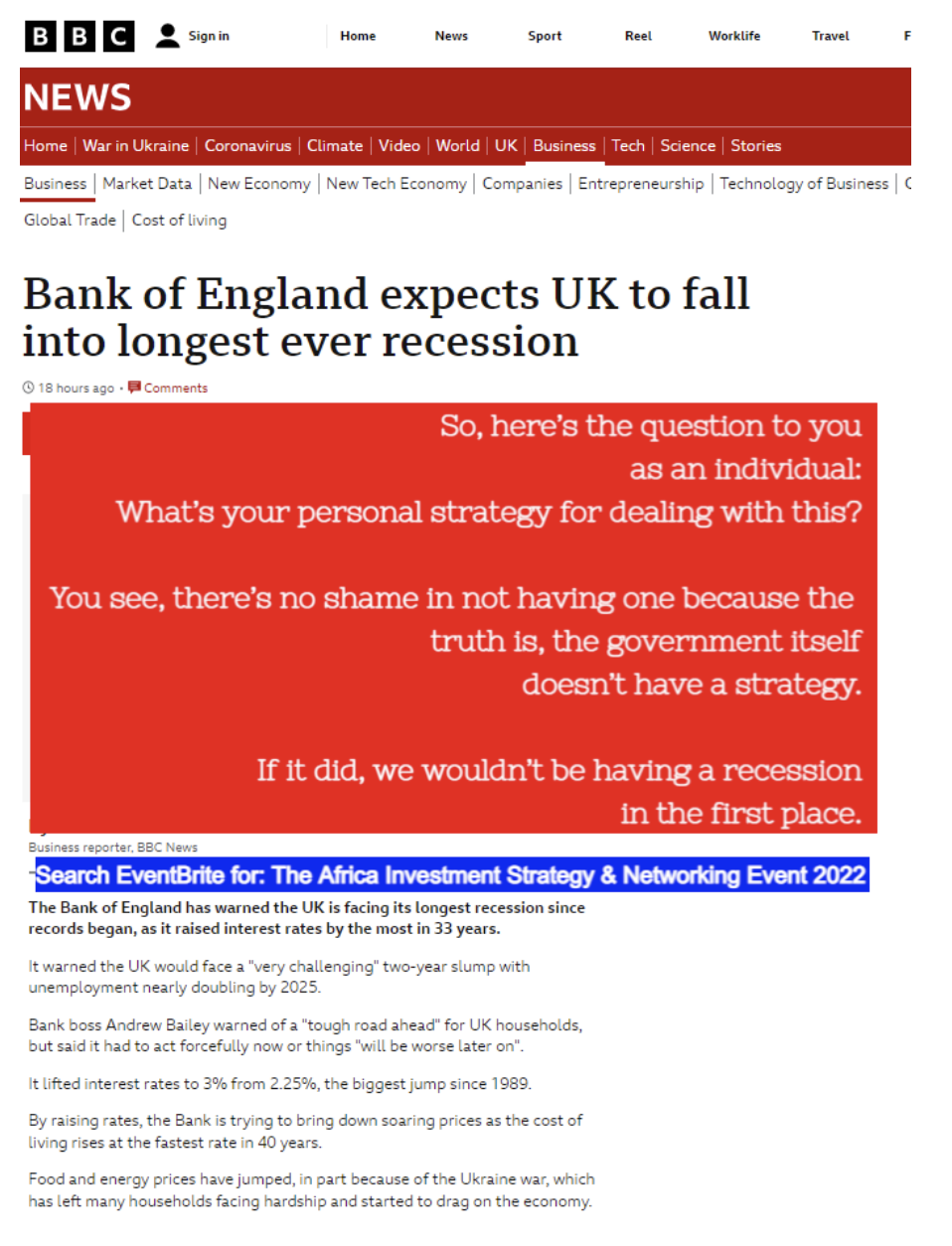 At the same time, many people of African origin often complain that the Chinese are taking over Africa. What is often missing from such conversations is how us, as Africans could help ourselves by employing an intelligent investment strategy.

Such a strategy in this case, would be employed in two parts. The first part is: What to invest in?

For that, answer is quite simple: Invest in sectors producing high demand goods in high growth sectors.

What to Invest In?

Clearly, Africa is a land of opportunity and right now – with the emerging commodities boom – is an even better time to look at the investment opportunities that we as the Diaspora could be taking advantage of right now.

Now, some people, want to invest in small projects that they can do by themselves. Those kinds of projects, to be fair, are, broadly speaking, not in competition with foreign investors. So, are not the subject of this article.

Today’s article is about serious, business proposals of investment-standard. Such serious investments are not out of reach if you read on. And the beauty of what we are discussing today is that, if you drop dead tomorrow, the investment does not die with you.

By default, therefore, the kinds of investment project I will address in this article are designed to give you a return as part of both additional income in the present and well into retirement.

And if you are interested in the detail of that, read on!

Agreeing the Nature of the Problem

1. The UK economy is headed for a very deep recession which will last until 2024. In fact, while it has not been mentioned in British media reports, the economy is already in recession.

Unemployment is also set to double. And considering the under-reporting of inflation throughout this year (2022), I will not be surprised if the Unemployment forecasts are revised upwards.

Furthermore, because of the deep structural problems facing the UK, this particular recession will bring with it some very serious turbulence. The overwhelmingly large combination of issues currently facing the UK include:

o loss of international trade – UK exports have fallen 25% due to Brexit;
o inflation caused by excessive money-printing (Quantitative Easing) since the 2008 financial crisis and further accelerated during the pandemic; inflation has been predicted by Goldman Sachs to hit 22.4% next year;
o the sanctions on Russia which have seriously damaged the UK (and other Western economies) by creating a squeeze in energy supply, resulting in both market disruption and price distortion – hence the doubling (and in some cases tripling) of energy bills;
o an uncertain political climate in which changes of leadership causes wild swings government policies of which have been widely reported. (Moody’s Credit Ratings Agency: UK’s Latest Economic Outlook Downgraded to ‘Negative’)
o the falling pound is particularly troubling, because the interest rate rise today (3 November 2022) would have, under normal circumstances, strengthened the pound.

This is the normal relationship between interest rates and exchange rates. The fact that Sterling actually fell today means a major lack of investor confidence in the British economy;

o falling living standards – Since the UK is a “Net Importer”; if imports are becoming more expensive due to a weak pound, a fall in living standards (for every single person!) is the guaranteed eventual outcome.

This has created a climate in which the creation of wealth is likely to favour the production of commodities (actual “real things” such as medicines, gold, food, energy and many other products that have a universal, worldwide
demand (Forbes: Russia’s Move To Gold May Jolt Your Company). The UK has zero comparative advantage in the production of these real things.

The medium-term to long-term trajectory will therefore be a distinct shift of:

o growth;
o and global power; on the world stage – away from economies such as the UK. For example, the UK’s economic powerhouse is the City of London, which is largely built on the back of trade in financial services. Many of these financial services are highly profitable – which is why financial services professionals make so much money. However, they are also quite obscure and few ordinary people use, let alone understand them. And as the balance of trade moves to the producers of “real things” (commodities) so does wealth, growth and global power.

3. Africa is the next big thing (Washington Post: How Africa Will Become the Centre of the World’s Urban Future. And in order to win in this fast-emerging future economy (as described in points 1. & 2. above), any serious participants in this new African economy that is rapidly
taking shape, must therefore:

o be future-focused;
o pursue a high-growth strategy;
o be led by a professional management team;
o make a large investment in order to compete at a global level;
o be scalable through intelligent use of the latest technology for that industry;

This article has answered the “What do I invest in?” part. What remains now is the “How to invest?” and for this part, the best way to answer this question is to show you.

So, to help you see it for yourself, I am pleased to invite you to the Africa Investment Strategy & Networking Event – 2022 at Chart Hills Golf Club, on Saturday 3rd of December 2022 – from 12 noon to 5.30pm (networking drinks and music from 6pm until midnight).

This beautiful, world-famous golf course was designed by Nick Faldo and is a fitting venue for an event of this importance. The event has been specifically created for anyone who has ever seriously thought of investing in South Africa, Malawi, Zambia or Zimbabwe. The investment sectors targeted are commodities with a universal demand – including medicines, gold, food and energy among others.

Most importantly, you will hear from UK-based keynote speakers; and CEOs of high growth companies, who are on the ground in Africa and are experts in their field. The purpose of having them is specifically to help you benefit from their expertise to find out how ordinary people –
particularly those in the UK – can participate in this emerging economic giant that is Africa.

Tickets are £60 on EventBrite. Enjoy £10 off with the promo code: EarlyBird. Click here to secure your seat. Discounted tickets are available until 14th of November or while stocks last. If the link doesn’t work, just search on EventBrite for: The Africa Investment Strategy & Networking Event. 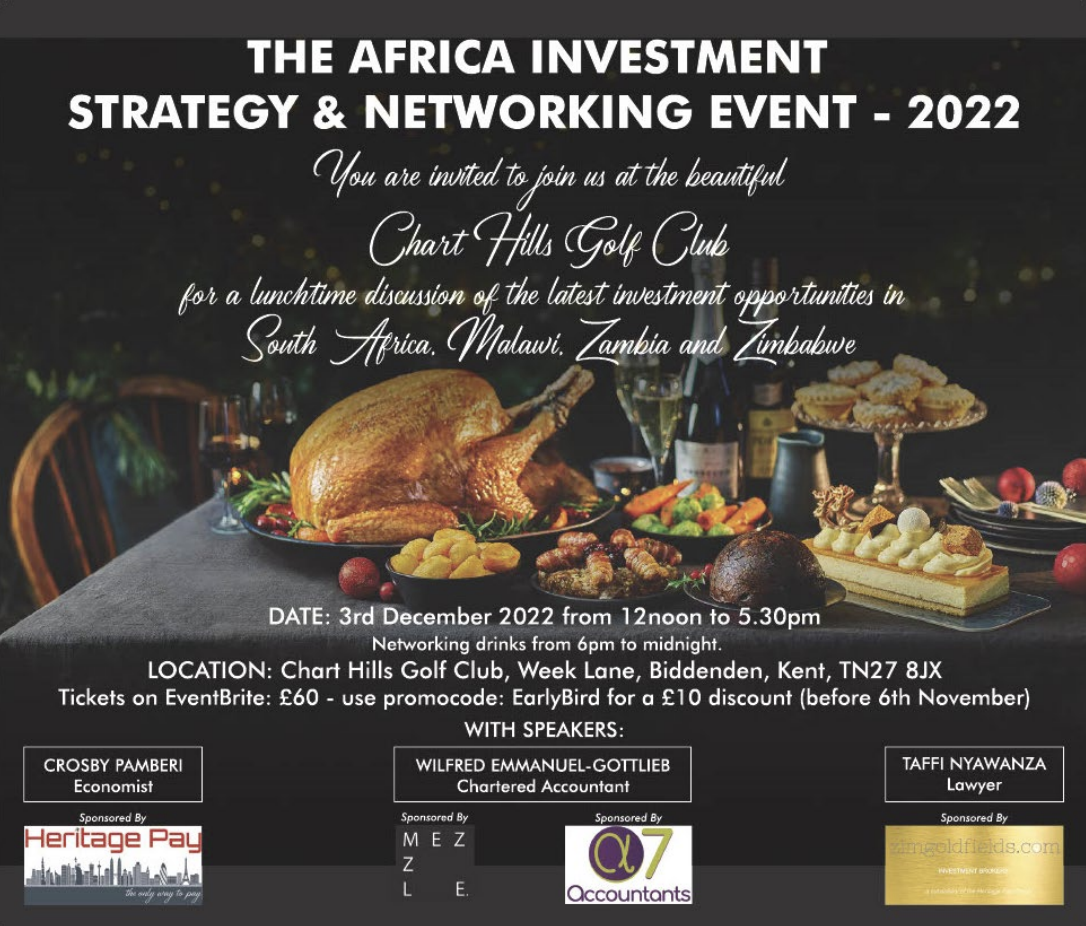 On behalf of myself, other Keynote Speakers and participants, I look forward to welcoming you to The Africa Investment Strategy & Networking Event – 2022!

Robbers kill Christ Embassy woman for her phone, handbag and US$140