To get to Gogo Effie Dziva’s doorstep, visitors have to step on a thin plank perched precariously over a trench that prevents raw sewage from flowing into her house. 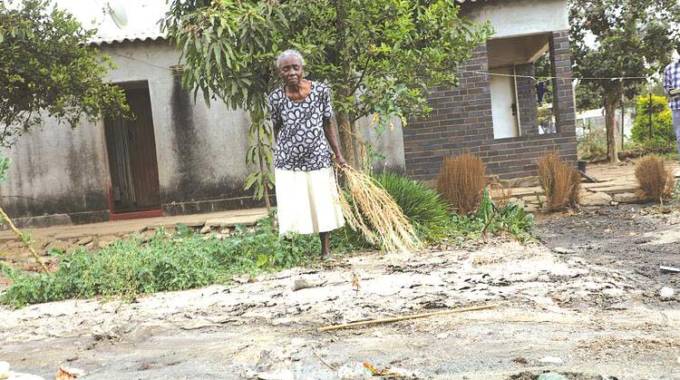 It has been like this for the past four months after a manhole sewer burst close to the 82-year-old Kambuzuma grandmother’s house in Section 6.

Despite having to deal with raw human excreta, she has to fend for her 49-year-old son, who is incapacitated after suffering a stroke.

As if this is not enough, her vegetable garden — the only source of income — is now submerged in sewage.

The borehole she uses is not properly secured.

“The disgusting odour is awful and becomes more unbearable by the day,” she lamented.

Harare City Council has been failing to repair burst sewer pipes in her neighbourhood.

Oblivious of the dangers, children play hide-and-seek near a heap of garbage as a strong stench from the rotting food and diapers envelops the environs.

The putrid smell is pervasive and attracts buzzing big flies.

With their dilapidated sewer systems that are filled with human excreta, the area is a perfect breeding ground for salmonella-typhi bacteria, which causes typhoid.

Gogo Dziva’s neighbour, Ingrid Marange, told The Sunday Mail that she has since sent two of her children to live with a sister in another suburb to help them escape the deplorable living conditions in the area.

“I could not stand them playing ‘hop-skip-and-jump’ over pools of sewage effluent. Imagine, it’s winter, but mosquitoes are already menacingly biting at night.

“We keep doors and windows shut at all times, living like we are in prison.”

Marange suggested the council should at least spray the pools of sewage effluent at Gogo’s house with insecticide to control mosquito breeding or use disinfectants to suppress the stench.

“We can no longer enjoy our meals in such conditions.”

Several attempts by Gogo Dziva to have the sewer bursts attended by council officials have come to naught.

“I was even threatened by some council officials that if I take the matter to Town House, they will still not fix the mess. Some time ago, I saw the Town Clerk and he promised that action will be taken, but nothing has changed,” she said.

Gogo Dzivas’ predicament mirrors that of most Harare residents.

Dry taps, burst pipes, human excrement flowing out of leaking sewer lines are challenges most residents have to endure, as the Harare City Council continues to short-change the public on service delivery.

A snap survey by The Sunday Mail last week showed that areas like Dzivarasekwa 2, Kambuzuma, Kuwadzana and Glen View 3 in Harare were among the worst affected.

City of Harare spokesperson Mr Michael Chideme said they are working flat out to attend to all sewer bursts and encouraged people to report all sewer leakages to the local authority.

“We are attending to all sewer bursts. We are also urging people to report all bursts for quick responses,” he said.

However, for a long time, the local authority has been accused of temporarily attending to the blockages without fixing the root causes.

A council workman who spoke to The Sunday Mail on condition of anonymity said maintenance of the aging sewerage system was a daunting task, but it was aggravated by residents flushing down solid objects, causing sewer pipe blockages.

“At times we retrieve stones, broken glass, spoons, rags or mops and other hard objects when clearing blockages in the system.

“It is no longer unusual to find entire sheets of a newspaper, used sanitary pads, children’s shirts or shorts among items blocking the system.”

Harare Residents Trust (HRT) director Mr Precious Shumba said: “As HRT, we have noted that the City of Harare lacks the capacity and the willpower to pursue solutions proffered by residents and their technical people.

“We are concerned that lives are lost and they do not learn from history and come up with substantive interventions.”

Mr Shumba said the local authority was supposed to replace the old water and sewer pipes as a long-term solution. The Sunday Mail