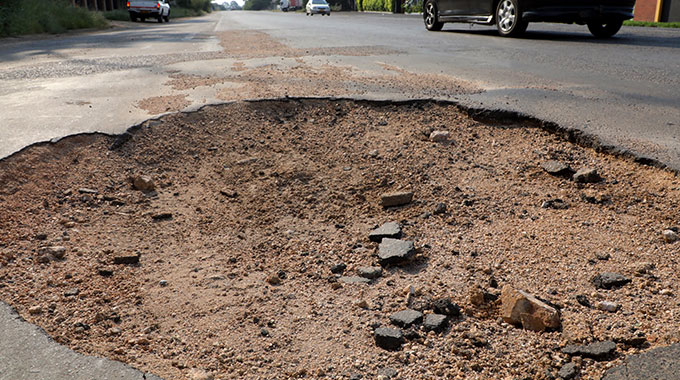 Most roads in the country are in a bad state and Cabinet recently declared the road network a state of disaster due to damages caused by heavy rains witnessed in the just ended rain season.

The road linking Bulawayo and Tsholotsho via Nyamandlovu which is a strip road had been in the bad state even before the rain season.

The Ministry of Transport and Infrastructure Development last year rehabilitated and widened a stretch running for 2,4 km from near Norwood towards Nyamandlovu.

Transport operators say some kombi owners ran out of business after their kombis broke down due to the poor state of the road.

The chairman of Bulawayo-Tsholotsho kombi operators, Mr Mzingeli Dube said there was an urgent need to rehabilitate the road.

“What has made us abandon the Bulawayo-Nyamandlovu-Tsholotsho road is the poor state of the road. The road has been in bad state over the years but now it is just untrafficable. Driving on the road is a nightmare and no one would want to risk their vehicle on it anymore,” said Mr Dube.

He said a journey that would otherwise take 1 hour 30 minutes now takes up to 3 hours 30 minutes.

Mr Dube said when travellers board kombis they first ask which road they are using and if an operator says they are going via Nyamandlovu they opt for alternative transport.

“We are losing a lot of money replacing tyres and other spare parts because of that road. While we appreciate that money is a challenge the Ministry of Transport must at least send a grader to temporarily attend to the road now so that is usable,” he said.

Mr Dube said travelling to Tsholotsho from Bulawayo via Solusi which they are now doing is not good for business as there are many people in farming areas in and around Nyamandlovu who are left stranded or at the mercy of pirate Honda fits who over charge.

Another operator, Mr Majaha Khuzwayo, said Government must move with speed to do something about the road.

“The worst part of the strip is between Chelmer to Nyamandlovu. To save our vehicles we then instructed our guys to use Solusi Road which is much better compared to that road. Spare parts are very expensive and it ends up not making business sense to spend all the money buying spare parts,” said Mr Khuzwayo.

He said even patients who need urgent attention when referred to Bulawayo have to be driven on that road.

A driver, who identified himself only as Sando said: “The potholes are everywhere even on bridges and after driving on it the whole body you will be in pain. It’s only a matter of time before we record serious accidents on that road if nothing is done because some drivers do not move to their side when you pass each other.”

He said passengers complain a lot because of the hours spent on the road.

A passenger, Mrs Polina Ngwenya, said they now prefer to travel via Solusi because of the time factor.

“My brother going via Nyamandlovu is hell, besides taking long it takes bravery to endure that road. I remember this other day a passenger vomited a lot during the journey between St Jame’s and George Silundika School turn-off,” she said.

Mrs Ngwenya said it was a challenge if one wants to attend to an emergency either in Bulawayo or Tsholotsho.

Tsholotsho Rural District council chairperson, councillor Esau Siwela said the Bulawayo-Tsholotsho road is a State road hence there is very little that council can do.

“There is no dispute about the state of that strip; it is in a bad state. As council there is little that we can do and if we were to do something it will take us to talk to Umguza Rural District Council as well because part of the road passes through their area. We will have to involve the minister of state also,” he said.

Matabeleland North provincial roads engineer Stephen Kamutema said the road will be attended to under the national road rehabilitation programme.

“We are aware of the situation of the road but I am not able to give timelines as to when we will move in. Once I have those details, we will give you the information,” he said. The Chronicle