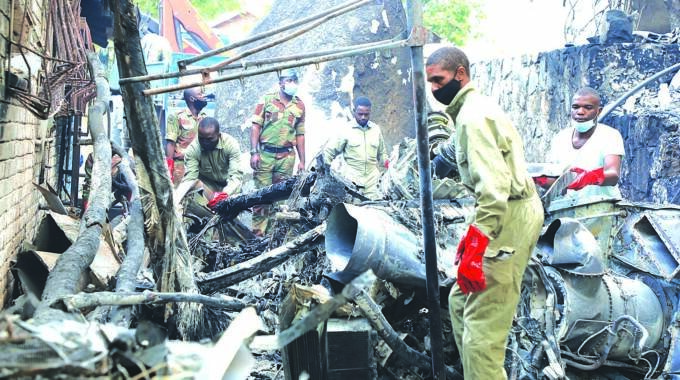 Beloved, departed and great Zimbabweans, this surreal, most-unusual epistle was how I felt to affectionately grieve-for, love-on and honour you, distinguished, fearless, skilled and warrior airmen.

This letter I lovingly pen to you, departed fellow aviators, hoping-against-hope and contrary to my straitjacket faith; somehow believing there was just this small, unlikely chance that you could read it and I could make you smile, in your new, surely pain-free world, beyond.

Since that depressing, dark-day of your untimely departure, April 23, 2021, a Friday, I have not only agonised, but I have prayed that your souls may somehow catch even just a glimpse of the deluge of love for you.

I herein pour out as exhibited by multitudes of sympathies expressed by fellow countrymen and women, near-and-far; all heartbroken at your premature demise.

This letter, will not be much consolation, if any, to your grieving and inconsolable families and the Commander of the Air Force of Zimbabwe, Air Marshal Elson Moyo, officers, men and women of the AFZ.

Many were gutted by your early passing and have been asking, “what went wrong?”

Will we ever know specifically what precipitated your terribly premature demise?

We hope that our aviator sleuths will painstakingly retrace the events as far as possible and help bring closure by explaining why the dreadful events of April 23 happened.

I have already shared and will continue doing so, in order to educate some unknowing and excitable folk among us who maliciously claimed and spread unhelpful falsehoods, without any facts whatsoever, about what happened on that terrible day.

No, a rotor blade did not surreptitiously detach from your aircraft in flight and precipitate the sad crash.

Such is virtually unheard of on a super-constructed, robust, military-grade Bell helicopter.

We will await the outcome of the official inquiry, anyway.

I have shared with fellow Zimbabweans that although aircraft are way-safer than cars, they are still imperfect.

Something can go wrong, as it indeed did on April 23, prematurely robbing us of your three souls and a terribly unlucky child on the ground. Dear departed, airmen, this you knew; that smaller aircraft will crash at a comparatively higher rate than bigger ones.

Aviators accept that rotorcraft are demanding machines, far-more complex than fixed-wing aircraft and therefore have a greater inbuilt fallible predisposition to fail.

It is what it is.

All of us airmen have juggled the risks we assume at the controls of these heavier-than-air machines.

Statistically, we are safer flying than when driving, but still we remain aware of the susceptible danger and that accidents, though rare, can and will happen, notwithstanding accomplished pilots at the controls of even new aircraft equipment.

In 2020, the world grieved for basketball superstar, Kobe Bryant, who perished after his helicopter, a dual-engine, state-of-the-art Sikorsky S-76B, crashed.

The late billionaire Leicester City FC owner Vichai Srivaddhanaprabha passed on in 2018, seconds after lift-off when his state-of-the-art AgustaWestland AW169 chopper spun out of control at the football club’s King Power stadium. It was established that a critical tail rotor-pin detached, feeding an uncontrollable spin.

Unbelievable for a helicopter owned by a billionaire.

There are always many variables in flying, some uncontrollable.

Regrettably, such is life, dearly-departed.

Sadly, some uninformed among us think a helicopter will crash just because it is “old.”

This couldn’t be any further from the truth.

Flying a helicopter, let alone a military one, is inherently dangerous.

You, my distinguished fellow Zimbabweans, braved the clear-and-present danger and did what you had to do.

The President of Zimbabwe and Commander-in-Chief of the Zimbabwean Defence Forces, Emmerson Mnangagwa, lamented your demise: “…as we await details concerning this tragic incident, may I, on behalf of the party Zanu PF, Government, the Zimbabwe Defence Forces, and on my behalf, express my deepest condolences to relatives of the airmen who perished in this rare incident….”

With your untimely death, Zimbabwe has paid a hefty price, losing three highly-skilled airmen in an instant.

We can barely afford to pay that price.

Dear, departed great Zimbabweans, it is known by all aviators that rising to become a helicopter pilot is never easy.

It is a case of surmounting one challenge after another and fulfilling exacting test after test.

There’s a lot of theoretical study and rigorous airwork, including the actual flying sorties that go into earning a helicopter pilot’s licence, let alone for combat.

Notwithstanding my grief, I chuckled when I read about the outcome of Flight Lieutenant Anita Mapiye’s first few flying hours.

I know. It is the story of many-a-freshman pilot — sweaty hands, trepidation and doubt as you admire your flying instructor calmly manoeuvring the aircraft whilst you struggle with the basics, such-as keeping the aircraft flying straight and level.

And uncertainty amplifies within you, “maybe I was never meant to be a pilot,” you often find yourself asking the question.

Many give up. You didn’t.

You did it our girl-child, Anita.

You earned plaudits no one could ever take away from you.

You join an illustrious list of historic, civilian and military lady airmen, including Derbie Carter, Emilia Njovhani and Chipo Matimba, who each achieved their own landmark-first for local aviation and greatness against the odds.

Airmen Manyowa, Mapiye and Chikamhi, may your loved ones forever reminisce on the delightful memories made over the years, and remain ever-proud of your distinguished work serving Zimbabwe.

Gerald Maguranyanga is a trained pilot and aviation commentator. The Sunday Mail