A two-roomed house built through donations for a 108-year-old great grandfather from Bulilima District in Matabeleland South Province is now complete and the old man has since moved in. 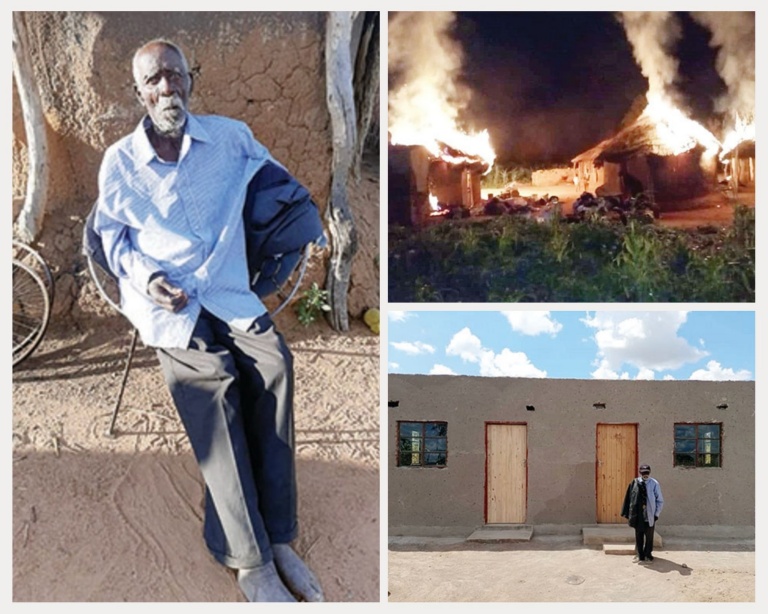 In January, Mr Lewis Phiri’s homestead was torched by his granddaughter’s enraged boyfriend Felix Moyo (25), who is still on the run. The dispute was over R40.

Phiri and his 66-year-old wife, Esinathisina, were sleeping when the incident occurred but managed to escape unhurt.

Moyo threatened to kill anyone who dared to enter the burning four huts to salvage property.

Chronicle launched a campaign to drum up support for the family and a number of people and organisations came forward to assist.

The resultant outpouring of love through donations by corporates led by PPC Zimbabwe and individuals has restored the old man’s dignity and returned the smile on his face.

Mr Phiri told Chronicle recently that following the arson attack, he had lost faith in humanity but the “miracle” that has shown him the humane side of his fellow countrymen, has renewed his belief in good things and mankind.

He ran out of words to thank people – mostly strangers – from around the world for assisting him.

Mr Phiri said he was deeply indebted to Chronicle for helping to make the world aware of his plight and triggering the support that resulted in his house being reconstructed in just under two months.

“Now I walk with a spring in my step and I wake up with a song in my heart, knowing there are good people in the world,” he said, while in tears.

“I am at a loss for words to thank all for the assistance we received. My gratitude to all the people who were touched by our plight and helped construct these beautiful two rooms. I now have something durable to shelter in. Some also gave us food and clothing and various other things, we are very grateful.”

Some of the organisations which chipped in with donations include PPC Zimbabwe which donated eight bags of cement to plaster the outside of the rooms and a Harare-based non-governmental organisation Africaid Zvandiri, Plumtree Rotary Club, churches and individuals who include former Highlanders coach Cosmas Tsano Zulu who donated a suit in response to Mr Phiri’s lamentation that he had lost his in the inferno.

The donations were also coordinated via two WhatsApp groups, one in Zimbabwe and another in South Africa which saw around R10 000 and $10 000 being raised.

A Zimbabwean based in Sweden, Mr Tichaona Maphosa, pledged to give the family US$50 every month for a year and has so far sent the money for January and February.

The coordinator of the South African fund-raising group, Mr Derrick Ncube, hailed donors for showing the spirit of Ubuntu when the family was going through a difficult time.

He said the work which was done for the 108-year-old man shall forever be remembered by the family and the community and would forever serve as a reminder of the good that results from having everyone become “their brother’s keeper”.

“We thank you all for your donations which have seen us build shelter for Mr Phiri and his family. We pay homage to the builders who offered their services for free and Ntjinjika Village for their support. It is clear testimony that united we can achieve so much. We should channel this spirit to address some of the challenges we face in our communities like equipping our schools and building health centres,” he said.

Mr Ncube also saluted Chronicle for bringing the story to the attention of members of the public, making it possible for much-needed help to reach the family.

He said journalists and the media are an important tool in solving community problems.

“From this story we have learnt that the media can be a good tool for development in our society. We urge you to continue uniting members of the public to support one another during such times and to develop their communities,” he said.

Mr Ncube said although appeals for donations have closed, those who may still want to donate can reach out to the family through the old man’s granddaughter Sibongile Zimande on +263 77 657 2691. The Chronicle