The man known as “the Special One”, Jose Mourinho, once declared: “It is better not to concede a goal than to score one!” This was a vintage Mourinho statement which reinforced his football philosophy rooted on a strong defence. 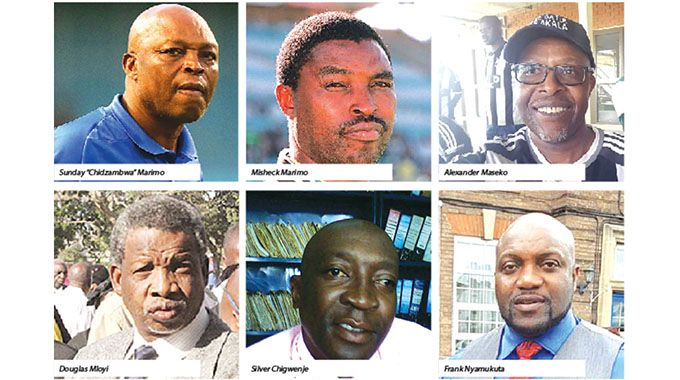 Defence for him is the bedrock of football success. A good centre-back partnership can go a long way in achieving defensive stability. In that spirit, let me look at a few from Zimbabwe.

I know a topic of this nature will be controversial, many will be left out. It is indeed difficult to mention everyone but I will try to cover as many teams as possible and to mention even the less known. Once more, I will focus on the post-Independence era.

When I started watching football in Zimbabwe around 1981, I followed CAPS United closely.

I know that the defence was often cited as the weak link in most of the CAPS United teams, with the midfield and attack compensating for the frailties in this department. But good partnerships emerged too over the years.

Let me make CAPS United my first port of call.

William “Weeds” Chikauro and Charles “Raw Meat” Sibanda was a good partnership which gave the CAPS United defence of the 80’s a decent look. These two had taken over from the formidable partnership of Salad Twaliki and Elisha Gejo. That one ended in 1980 and I did not watch it. Legend, however, has it that it was one of the best.

Along the way, many more emerged. Tobias “Rock Steady” Sibanda partnered Paddington Zhanje. Zhanje was the weak link and spent most of the time playing the ball back to the keeper to kill time. Thank God, Silver Chigwenje quickly emerged and I can say he formed a formidable combination with “Rock Steady”.

“Bhonzo”, as Chigwenje was known, and “Rock Steady” were just solid.

There was also the Asani Matola and Zambian international Laughter Chilembe combination. Asani was a great defender but his commitment to training was questionable so often Silent Katumba played alongside Chilembe.

What about at CAPS United’s arch-rivals Dynamos?

“At Dynamos, we had many good centreback partnerships which made us hard to beat!” boasted long-serving Dynamos captain Memory Mucherahowa. “We had the Marimo (now Chidzambwa) brothers, Sunday and Misheck, that one was a tough nut to crack, impregnable!” he added.

I agreed with him on this one. I listened to “Mhofu”, as Sunday is known, boasting about this combination.

“We complemented each other well, Misheck was tall and dealt with all aerial threats, I focused on anything on the ground, this is how we frustrated good strikers like Shacky Tauro. Misheck dealt with him in the air, I dealt with him on the ground. We were invincible,” Chidzambwa said in a recent interview.

“This was simply great, we felt unbeatable with these two in defence. Of course with Angirayi Chapo and Eddie ‘Major Murefu’ Muchongwe as full backs, teams struggled to score goals against us,” said the former DeMbare captain.

Players like Watson “Kabila” Muhoni and Nyasha Kanogoiwa also contributed but did not last long enough to make a big impact. Muhoni died in a car accident and Nyasha migrated to the United Kingdom.

Currently, I know there is Patson Jaure who is highly rated as a centreback but I am not sure who his partner is. It is fair to say the current crop will need to work extra hard to reach the standard of yester-year greats.

What about Highlanders “Bosso”, which partnership gave the fans confidence?

I asked former Masvingo United and Bosso winger Douglas Zimbago and he seemed to concur with another Bosso legend Blessing Gumiso.

“Thulani ‘Biya’ Ncube and Dazzy Kapenya were simply great, I rate it as one of the best CB partnerships to emerge!”

I think I totally agree with him although some people from an earlier generation might disagree.

For a long time, Maseko also played with Simon Ncube and later with Cleopas Dlodlo.

“In fact, from 1986 to 1991 I was a permanent feature at the heart of the Highlanders defence where I first played alongside Douglas Mloyi before I partnered Richard Ndlovu, Simon Ncube and then Cleopas Dlodlo. All these guys were so good and many a strikers, including the legendary Shacky Tauro, found it difficult to go past us,” boasted Maseko, who was speaking from his base in Johannesburg, South Africa, last week.

Cross city rivals Zimbabwe Saints had Steven Chuma and Gibson Homela before the emergence of Ephraim “The Rock of Gibraltar ‘’ Chawanda and Misheck “Roadblock” Sibanda. What a partnership that turned out to be as “The Saints went marching” to the league title in 1988.

Kenneth Mathe also slotted in to partner Chawanda according to Lovemore Dube .

He also waxed lyrical about the partnerships at Ziscosteel in the early 80’s.

“Many fans might not be aware but Ziscosteel had some really good partnerships. Clement Sibanda with Ephraim Moloi. Moloi was a great sweeper, he went on to play alongside Adiel Chibaya and Benedict Moyo.”

Moyo also partnered Paul Gundani, what a partnership it was. “Grinder”, as Moyo was known, also played alongside Newman Bizeki and it was a strong partnership.

Amadu Sosala also had a brief partnership with Tobias Moyo. It was promising but Tobias Moyo soon left to join CAPS United, how unfortunate!.

Eagles FC will always be remembered for playing carpet football with players such as dribbling wizard Boy Ndlovu, showman Francis Paketh, Rahman “Rush” Gumbo and Stanford Ntini among others. The partnership which made them such a decent outfit at CB was that of Felix Ntutu and Arthur Makombe. This was a decent partnership.

Black Aces had Charles “Star Black” Kaseke partnering Absolom Nyabinde. If I have to talk about the elders at Black Aces, I have to mention the late Shadreck Ngwenya together with Charles Mapila (late) although I think this was on the wane after Independence. Let me also add Kifton “Somalia” Kadurira in partnership with Webster Lozenjani. This was another decent one.

I always consult legend Japhet “Short Cat” M’parutsa in many matters football related. I wanted his word and he gave me an interesting list.

“At Rhinos we had Lovemore Chikunha with William Chikauro. I regard it as one of the best that I played with. Potiphar Munhenga was also good and often came in to partner any of the two. He was so good that at times he forced Ernest Mutano to play as a defensive linkman…”

I found that interesting because not many know about the exploits of Munhenga.

At national team level, “The Short Cat” rated Sunday (Marimo) Chidzambwa with Ephert Lungu and then Ephert with John Phiri.

Steven Chuma also partnerd Sunday Chidzambwa and according to the legend, it was a good partnership. I was surprised that he did not mention the Misheck (Marimo) Chidzambwa and Ernest Mutano axis. Was it because of the Dakar match when Senegal’s Jean Betrand Bocande terrorised these two leaving then national team coach Wieslaw Grabowski fuming: “This is criminal defending, comical..”

Bocande scored a first-half hat-trick with headers past Japhet M’parutsa in Senegal’s 3-0 win over Zimbabwe in an African Cup of Nations qualifier in Dakar in September 1985.

That was one match which reduced the legends to schoolboys, Bocande ran riot so the less said about this partnership, the better.

Railstars had Batsirayi Dhliwayo with Admire Zingwe. Wisdom Sibanda also helped in this department . Arcadia United had Majid Dhana together with gentle giant Reg Payne. Dhana also used to play as a right-back.

I remember Ian Matondo well, he was tipped as a future Warriors captain but somehow he lost his way. At Tanganda, with Jimmy Kapitau and Mavhuna Mudare on the flanks, Matondo and Kadzirange made “Tan Tan” a formidable outfit at the heart of the defence. The Herald

India detains scores of Rohingya ahead of expected…