For someone who was a strong contender for the South African Premiership Soccer League Golden Boot last season, Knox Mutizwa’s indifferent start to the current term is cause for concern. 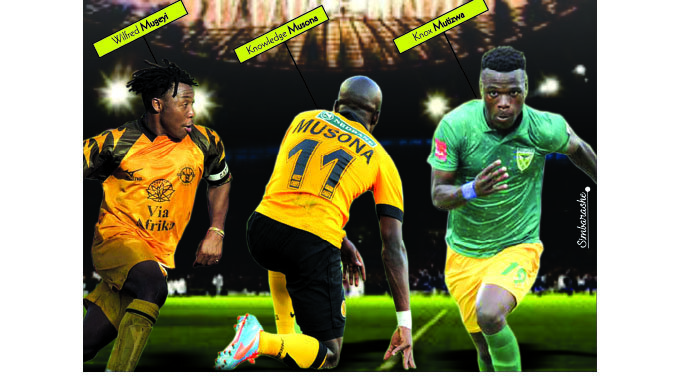 Unfortunately for Mutizwa, who has now clocked a century of games in the South African top-flight, there is nothing much to cheer about, following a poor start to the 2020-2021 DStv Premiership.

The 27-year-old striker is now into his fourth season at Golden Arrows and has bagged 33 goals in 104 appearances since joining the Durban-based side from Highlanders in 2016.

However, life is currently not rosy for Mutizwa, who is yet to open his account after nine rounds of action.

He has already been ruled out of the Golden Boot race by influential football website, Goal.com.

It looks like Mutizwa has lost his place in the Arrows’ starting line-up.

He only returned to the starting line-up yesterday when Golden Arrows played Chippa United, which was his second start in nine league matches.

According to Goal.com, who ranked their favourites for the 2020-21 Golden Boot award soon after the Christmas break, Mutizwa is unlikely to challenge for the gong.

“The likes of Knox Mutizwa, Mwape Musonda, and Ndumiso Mabena will probably continue to score for Golden Arrows, Black Leopards and Bloemfontein Celtic respectively, but likely not enough to really challenge for the award,” wrote Goal.com.

Bradley Grobler of SuperSport United, who has now scored eight goals in eight league matches, the Sundowns duo of Themba Zwane and Shalulile, Luvuyo Memela (AmaZulu) and Ruzaigh Gamildien of Moroka Swallows are being tipped for this season’s Lesley Manyathela award.

Mutizwa’s unconvincing start to his fourth season in South Africa has brought back into perspective Zimbabwean strikers’ historical performances in the neighbouring league.

From Ebson “Sugar” Muguyo in the 1970s, Zimbabwe has over the years, been a major exporter of strikers to the South African Premiership.

Some of them have gone on to challenge for the prestigious Golden Boot.

Former Warriors striker Wilfred “Silver Fox” Mugeyi was the first recipient of the award in 1997 after plundering 22 goals for Umtata Bush Bucks.

Since then, only two other Zimbabwean strikers, Gilbert Mushangazhike and Knowledge Musona, have won the Lesley Manyathela award, named in honour of the South African international who perished in a car accident in 2003.

Mushangazhike won it in 2001, after scoring 19 goals for Manning Rangers, before Musona clinched the award in 2011, having found the back of the net 17 times for Kaizer Chiefs.

Cuthbert Malajila and Khama Billiat came close in 2015 and 2016 respectively when they were still turning out for Sundowns.

Musona remains the last Zimbabwean to win the award.

Mutizwa’s current form could, however, be an indication of how difficult it is to stay on top in the highly demanding DStv Premiership, according to some retired Zimbabwean forwards who featured in that league.

Former Jomo Cosmos striker, Benjani Mwaruwari, who won the league’s Player of the Year award in 2001, has been observing the trend for the past four seasons and has come up with his own conclusion.

“Yes, it’s difficult for a foreign striker plying his trade in South Africa, because instant results are demanded, but sometimes blaming the strikers alone is not fair.

“I think it is difficult nowadays for strikers to keep on banging goals because we no longer have the creativity and artistry that strikers back in the day used to enjoy.

“A creative midfield is key if we are assessing a striker,” Mwaruwari told The Sunday Mail Sport.

Mwaruwari scored 20 goals in 45 matches for Cosmos, before he was named Player of the Year in 2001.

Breaching the 20-goal mark has become too big a mountain to climb for strikers in the South African league, the domestic Premiership, and the whole of Southern Africa in general.

The last player to score 20 goals in the South African Premiership was former Bafana Bafana striker, Siyabonga Nomvete, who achieved that feat with Moroka Swallows in 2012.

In the local league, no striker has been able to surpass Norman Maroto’s 22-goal mark achieved while he was at the now-defunct Gunners.

Veteran Zambian striker, Collins Mbesuma, remains the highest scorer in the history of the South African top-flight, with 25 goals for Kaizer Chiefs during the 2004-2005 season.

“Judging from what I have seen and observed over the last four seasons, this goal drought is not solely a problem for strikers.

“Today we lack creative midfielders and assists are drying up.

“Take a look at top strikers in the European leagues; they score 20-plus goals every season because of the kind of assists they get from their creative midfielders.

“But if you go back to Golden Arrows, for example, where Mutizwa plays, you have midfielders with an assist average of less than 10 per season,” reckons Mwaruwari.

“Back in the day when we used to play in the South African Premiership, there were a large number of creative midfielders.

“At Umtata you had the likes of Thabo Mgomeni and John Maduka, at Ajax Cape Town there was Steven Pienaar, Dinha (Edelbert), and Dillon Shephard.

“A striker would have an avalanche of chances and you could afford to miss two or three clear chances but still manage to score two.

“Nowadays, strikers no longer have that luxury. How do you expect a striker to score 20 when there is no supply line?

“There is also this pressure that comes with being a foreigner. You need to prove that you are better than the local players.

“You can’t afford to go for five or six games without scoring. But, the issue rests with the dearth in creative midfielders,” Mwaruwari said.

Former Zimbabwe national team striker, Luke Petros Jukulile, who played for Kaizer Chiefs between 1999 and 2002, has done his own assessment.

“When you join a foreign team, usually there are household names at the club who are used to the culture and style of play. When I joined Kaizer Chiefs I had to compete with the likes of Siyabonga Nomvete, Jabu Pule and Thabo Mooki, and these were sort of the blue-eyed boys.

“These guys are usually out to protect their positions and they are a bit jealous when a foreign player is brought into the team.

“They will not show it openly but on the pitch, they will show it,” revealed Jukulile.

“Breaking into the team becomes difficult and settling also becomes insurmountable because sometimes you are not given time.

“It becomes worse if you are a striker because you are measured with how many goals you score. The coaches there are not patient with foreign players, because they want results and they expect you to do better than the local players,” said Jukulile, who now coaches Premiership returnees Whawha.

Stewart Murisa, who scored 10 goals for Amazulu in his debut season in the SA Premiership in 1997/1998 season, has a different opinion.

“This problem is not confined to South Africa; it is a problem that we are also grappling with locally.

“In fact, the whole of Southern Africa no longer has lethal strikers,” said the CAPS United assistant coach.

“We need to develop these strikers. Development of strikers is not being taken seriously,” says Murisa, who won the Soccer Star of the Year award with CAPS United in 1996.

“However, you can’t take away the fact there is added pressure on foreign players because much is expected from them.”

Zambian strikers have fared better in the South African league if statistics are anything to go by.

They have won the award on six occasions since the league’s inception in 1996.

Mame Niang of Senegal won it at Moroka Swallows in 2006, Mhango of Malawi and Shalulile of Namibian are the other foreigners who have won the accolade. The Sunday Mail

Benjani gets his UEFA A badge