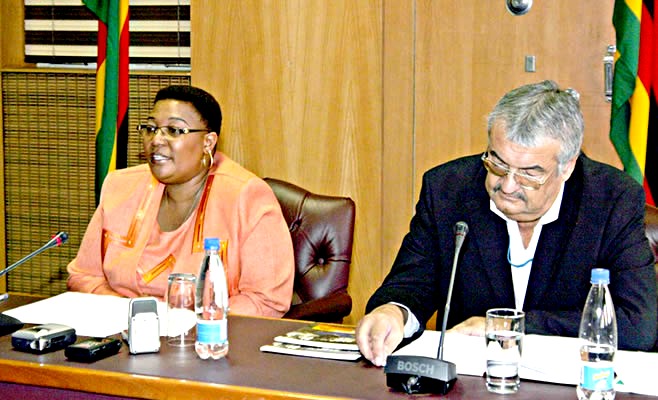 MDC-T interim president Thokozani Khupe yesterday summoned all provincial structures to Harare on Wednesday to inspect the voters roll as she moves to curb interim secretary-general Douglas Mwonzora’s alleged attempts to use a manipulated roll at the extraordinary congress to be held at the weekend.

The party was forced to postpone the congress last weekend after disputes arose over the voters roll amid allegations that Mwonzora availed a manipulated roll.

But the national council (NC), in a virtual meeting held yesterday, resolved to summon all 2014 structures to Harare to verify the voters roll.

The NC also resolved to fire Mwonzora’s lieutenant, Simon Hove, who was masquerading as the Harare provincial chairperson and was reportedly causing problems in the party in cahoots with him.

Daggers out in MDC Alliance.. as Mwonzora, Mudzuri, Komichi…

Defiant Thokozani Khupe attends her first meeting as a CCC…

The aborted congress had been scheduled for Harare last Saturday, but was postponed at the eleventh hour after Khupe and Mwonzora, seen as the main rivals, were involved in a vicious battle over the voters roll.

After the agreement to cancel the congress, another war erupted over US$29 000 that was allegedly given to some delegates clandestinely, it has emerged.

Yesterday, the national council made a resolution that the 2014 voters roll, which was produced by the Khupe camp, was going to prevail.

“The party has summoned its 2014 provincial structures to inspect the voters roll. Team Dougie suffered a blow. Mwonzora had presented a roll staffed with his allies who were not members of the 2014 structures, as ordered by the Supreme Court in March this year,” the source said.

“It was ordered that Simon Hove, Mwonzora’s ally who was masquerading as Harare provincial chairman, reverts to his position as treasurer in Hatfield district. He replaced the late Thomas Muzuva, who held the post. Hove was working with Mashonaland East provincial chairman Piniel Denga and Lloyd Damba, from Chitungwiza, to drive the process of filling gaps left in the structures with Mwonzora’s supporters before the party stopped them. Mwonzora’s team protested over Khupe’s gap-filling which brought in her backers, treasurer-general Chief Ndlovu and spokesperson Khaliphani Phugeni. Khupe referred to a part of the constitution that empowers her as party leader to appoint members to key posts to avoid a void,” he said.

A Matabeleland North provincial official is said to have asked for an explanation on allegations that Mwonzora and team took US$29 000 from party coffers, but the issue was abandoned during the virtual meeting after no one responded.

Efforts to get a comment from party acting spokesperson Tapiwa Mashakada and Mwonzora were fruitless as their cellphones were unreachable.

However, Khupe confirmed the new development in a statement she issued yesterday, saying that they were now using the 2014 structures to produce the voters roll.

“We called this meeting to update you on the postponement of the extraordinary congress (EOC) which was scheduled for the 19th of December 2020. This was as a result of irregularities in the voters roll.

There is no way we could have had the EOC with a disputed voters roll, which was going to produce a disputed outcome with the potential of leading the party to endless litigation, divisions and disunity. We expect to have a free, fair and credible election where all candidates and voters will be satisfied,” Khupe’s statement read in part.

She also urged party members to remain calm as her party works towards the congress.

“This is not a fight, but it is just a contest, so let us avoid tearing each other apart because after the EOC we have a party to run, which is an alternative government. We are aware that there are certain individuals who were pushing that the elections be conducted in open defiance of the leadership directive,” Khupe said.

“This kind of insubordination, ill-discipline and factional behaviour must come to a stop immediately. If this kind of behaviour continues, we will be left with no option but to take disciplinary action against such malcontents.”

In October, the MDC-T was given up to December 31 to hold the extraordinary congress to select a new leader after missing the July deadline that was set by the Supreme Court. NewsDay.

Daggers out in MDC Alliance.. as Mwonzora, Mudzuri, Komichi battle