The Airforce of Zimbabwe (AFZ) yesterday conveyed condolences to the families of two pilots, who died after their trainer aircraft crashed just outside Gweru in Somabula area on Tuesday afternoon. 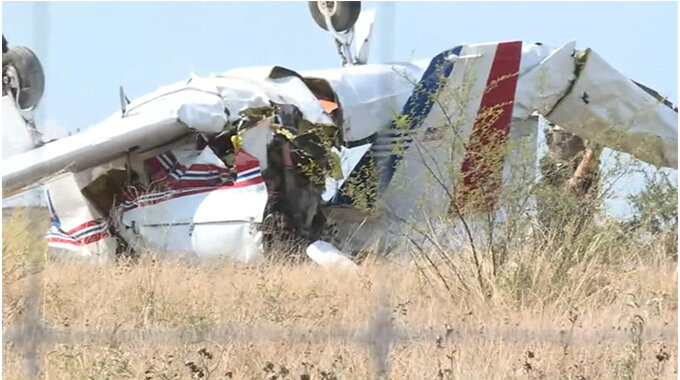 A flying instructor, Squadron Leader Mkhululi Dube and a trainee pilot, Officer Cadet Silungile Sweswe died on the spot when a trainer aircraft (SF 260 Genet) crashed around 2pm on Tuesday.

The two were on routine training from Josiah Tungamirai Airbase.

Airforce of Zimbabwe commander Air Marshal Elson Moyo said: “It was with a heavy heart and a deep sense of sorrow that I learnt of the aircraft accident that claimed the lives of our pilots. On behalf of the Airforce of Zimbabwe, officers and members and indeed on my behalf, I would like to express our deepest condolences to the families of Squadron Leader Dube and Officer Cadet Sweswe.”

He said the Airforce of Zimbabwe was robbed of a proficient pilot in Squadron Leader Dube and a dedicated trainee pilot.

“While the Airforce of Zimbabwe is mourning, it is also a moment to reflect and recognise the sacrifices and dedication of the deceased pilots. The AFZ will forever cherish their commitment to excellence in training and unwavering dedication to duty,” said Air Marshal Moyo.

Besides being a flying instructor, Squadron Leader Dube was the secretary general of AFZ football club, Chapungu.

The Chronicle news crew arrived at the crash scene on Tuesday afternoon when the bodies of the two were still trapped in the wreckage.

Witnesses said the plane which was heading southwards was trying to make a U turn when it crashed. The Chronicle.