The rebel king with a troubled crown. . . the life of Cal_vin 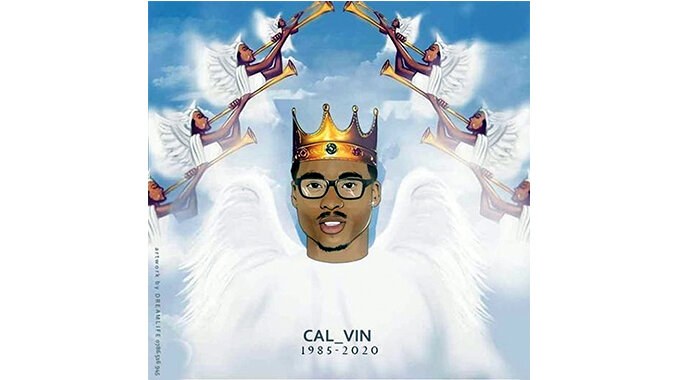 By Bruce Ndlovu
I had a dream about Cal_vin last Thursday night. Perhaps this was due to fact that, since his shockingly violent death on Sunday morning, he is all that I have been thinking about.

All I had been thinking about, was Cal_vin and water. Those were the two things that have been on my mind lately, and on Thursday the rapper with an impeccable Ndebele rhyme — flow and water, that liquid that has been dangerously scarce in Bulawayo, both seeped into my dreams as I slept.

In my dream, Cal_vin, came, unannounced and gently pushed the door on his way in. Basketball shoes cushioned his step as he stepped and then finally sat on the edge of my bed. The room was pitch black.

“Gazi,” I remember him saying. “The city has no water.”

With those words he leaned over and picked up a jug on the table next to my bed.

In the darkness I saw him, tilt his head back, and create the necessary slope for the water to flow down his throat all the way to his gut.

In my dream we harvested the water in buckets from a particularly violent storm. I wonder if he could taste traces of lightning and thunder from that sip. I did not say anything and I did not stop him from going from a second gulp from the jug.

“How do people expect me to be a rapper and bling out when I wash my body with a litre of water every day, you know what I’m saying?” and as he said this, I saw a perfect double row of white teeth flash and, for a brief moment, dilute the darkness in the room with a dash of white.

I do not know where that dream ended, just like I do not know where it began. Dreams are the movies that happen in our minds while we are asleep but unlike blockbusters, they have no start or end credits. So, my dream was over and while the memory of most dreams die before dawn, that one stayed with me until dawn.

That morning when I woke up, I looked around for Cal_vin in a room that he had never been in.

Perhaps that dream was stuck on my mind because the words he spoke sounded exactly like something he would say. Cal_vin’s life was one constant act of outspoken rebellion. Starting with his stage name, his whole act was that of defiance.

I first saw Cal_vin perform at Horizon Pub and Grill where he, alongside Tehn Diamond and Namibian beauty Delish were invited by Jackie Mgido at the launch of Vault Cosmetics.

Mgido was shocked when she heard that the rapper did not have a music video despite the quality of music he was making, and thereafter became his first benefactor, bankrolling his first video.

I had never seen him perform. In fact, what were my first couple of months as a professional journalist, I had never seen or heard a song from him. I had just read about him in the newspapers like everybody else.

That day, over an energetic set that spanned a few songs, all my doubts were laid to rest. Rarely had I seen a local rapper that hungry for success.

Every muscle in his body moved with the energy and intent of a man starving for higher achievement and recognition. That night, the first time I ever saw him on stage, was the best I saw of Cal_vin.

The following week, as I enthusiastically wrote about that performance, I was to get my first taste of the problems that came with writing about Cal_vin. Before I had put pen to paper, he insisted that his name should not be spelt without the underscore in the middle.

“That’s not how my name is spelt,” he said after I wrote it for the first time.

It was an easy enough instruction to give to a reporter. After all, we are used to rappers and their odd names. Arguably the greatest rapper of all time, Jay-Z, insists that his name should be spelt with an apostrophe despite the fact that he is now a billionaire, has the ear of powerful presidents and counts chief executive officers of mega corporations as his closest friends.

As simple as his request was, however, in the chain of production that goes into the making of a news story, it was always harder to explain to a white-haired elder in the sub-editor’s chair why anyone’s name needed an underscore.

After the first few times I wrote about him, I met him at a pub and jokingly told him he should consider removing the underscore because I would soon have a crown of white hair prematurely if I kept explaining to people who did not understand its intent or meaning.

With a beer spilling on his hand, he laughed the suggestion off. His name would always be spelt how he wanted it to be.

For those of us who had not known him before that sudden burst of fame and superstardom, those were the early days of Cal_vin. At that point, he was still untouched, still unmolested by the notorious drug known as fame.

Soon the big stages would come calling and bigger and better things would soon beckon for someone who was now clearly one of Zimbabwean music’s hottest music stars and the hip-hop’s newest darling.

In the arts, the darkest nights come after the brightest of noons, and it was not long before whispers of other side of Cal_vin made it to my ears.

Gigs in Harare were coming in thick and fast, the rumour mongers said, and in the bright lights of the capital, Mr Nhliziyo had taken alcohol and other trappings of fame to heart. He was now the golden boy of Zim hip-hop and promoters in the capital would have fed him wine via drip if he so wished.

One Harare promoter, however, told me that instead of the high-octane performer I kept raving to readers about in these pages, Cal_vin was now lazy, interested in imbibing more than performing.

So drunk he was on one big night that he stumbled across the stage, unable to tell whether he was holding a mic or the neck of a Russian Bear bottle, a vodka brand he publicised so much in those days  to an extent that some actually thought he was its brand ambassador.

When I spoke to him last year, he told me about how those months were spent mostly in a stupor, a daze during which he lost a friend due to alcohol poisoning and developed an alcohol induced medical condition of his own.

“I would drink and just start shaking. It started as a form of a hangover but eventually I would shake even during the drinking. That’s when I went to a doctor and he told me that my body couldn’t take it anymore. He told me to take a break from alcohol,” he said to me as we sat in the Sunday News newsroom.

In those few months between the release of Z’khupan and the end of the year, he was the most heavily booked musician in the city. During the lucrative honeymoon phase of his romance with stardom, much of his money found its way into the pockets of faceless vodka manufacturers.

“I was going through my booking contacts and I realised I made US$13 000 around 2015 through gigs alone but I didn’t do a single meaningful thing. I would get paid US$500 to US$1 000 to be on stage for 30 minutes and I would blow that money.

I would tell myself I’ll make this same amount again the next night. I travelled around the world and to Europe but all that money was squandered,” he said.

Perhaps some may have felt the need to be judgmental about those few months of reckless spending and hard partying. But others understood. Cal_vin had waited 30 years for that kind of success and it was expecting a bit too much of him to think he would not let loose when he was finally making money from his craft.

He was one of those rare artistes that would dissect his own mistakes while you listened. That day, as he spoke of his own alcoholism and that of his late father and of the community that he grew up in, he was only interrupted once in a while by his phone.

I felt like if I had stood up and left a recorder in my place, he would have continued talking. He did not need my ear, he just needed to vent.

His honesty, of course, was never always welcome. It got him in trouble on a few occasions, and the list of people he “beefed” with was long. Promoters would say he was difficult to work with. In an industry in which the exploitation of artistes is rife, Cal_vin was one who would not suffer in silence.

While he had his faults, Cal_vin’s cries were often in sync with the screams of other young people in Bulawayo. While others of his generation feel an ache and stay silent, swallowing their own screams, Cal_vin always gave his pain a voice. Whether on social media or in the studio, his anguish always had a platform.

In the end, he was called the king of hip-hop, a crown of thorns if ever there was one. Despite the fact that he was a “king”, Cal_vin’s life mirrored that of many in Bulawayo and Zimbabwe.

Rivals poked fun at the fact that he was still in Luveve, but in truth financial stability is needed for one to move away from the trusted roof one grew up under, and that is still very much elusive for many.

At 35 he died at a time when it felt like a major part of his story was still being written. He died after a hit and run car accident near his home last Sunday and will be buried today. That Luveve Boy, Intwana kaManax is no more. Until we meet again gazi! The Sunday News