CARJACKERS BONANZA . . . The smaller the car the bigger the deal

By Prince Mushawevato and Veronica Gwaze

One would imagine that high-value fancy cars are the holy grail of every carjacker, but this is not the case in Zimbabwe, where motorists who favour small, fuel efficient cars such as the Honda Fit, Toyota Raum and Mazda Demio are most likely to be targeted victims. 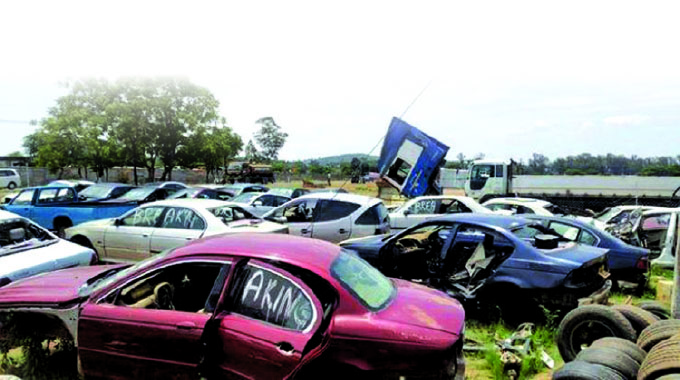 At least three-quarters of the 219 cars that were recorded stolen during the first six months of this year are fuel savers, according to statistics from the Zimbabwe Republic Police (ZRP).

Harare and Bulawayo account for most of the cases at 95 and 39 respectively.

Manicaland recorded 17 cases during the same period. Most of the stolen cars are never recovered as they are reportedly channelled to car-breakers — most of whom are not registered — and cannibalised for parts.

Not surprisingly, only 73 stolen vehicles were recovered during the January to June period.

Gogo Chinyerere wins another claim for compensation after…

Small second-hand vehicles of various makes mainly populate the streets of many cities across the country owing to unrelenting imports, particularly from Japan, after 2009 when the country adopted the US dollar as the main unit of exchange.

It resulted in an explosion of car imports. In the eight-year period from 2009, locals actually splurged more than US$3 billion on 324 000 cars.

While some vehicles were for personal use, the enterprising ones turned them into pirate taxis better knowns as “mushika-shika”. As the vehicles progressively break down, demand for spare parts has increased.

And this conveniently provides a ready market for spare parts dealers.

“The rate at which vehicles are being stolen is a cause for concern. Vehicle theft is classified as a serious crime in this country. We note that criminals are targeting cars with low-engine capacity like Honda Fit and Toyota Raum,” said police spokesperson Assistant Commissioner Paul Nyathi. “ . . . criminals are targeting these vehicles largely because they are on high demand. These cars are also preferred by robbers who use them as getaway cars because of their low fuel consumption.”

Drivers’ Association of Zimbabwe president and former police officer Nicholas Mabwe also confirmed that cars with small engines are “the most targeted by thieves”.

“Stolen vehicles are also used for mushika-shika or to commit crime. But some go on to break them for parts in a bid to destroy evidence. Sadly, most of the stolen cars are not recovered,” said Mabwe.

Most people struggle to get new spare parts when their cars begin wearing out. They naturally avoid reputable dealers because of their punitive prices. For instance, formal dealers charge not less than US$600 for a brand new Honda Fit gearbox, but the same costs half the price when secured from backyard dealers.

Unfortunately, some, if not most, of the spare parts sold by car-breakers are illegally sourced as their operations are neither registered nor regulated. It is believed this provides a fertile and lucrative market for carjackers.

The Sunday Mail Society made contact with Joseph Ndimba, a former car-breaker who had a stint in jail in 2015 after being convicted of trading in stolen cars and spare parts.

“Initially everything was legit; however, along the way I got wrong advice. A colleague of mine introduced me to some ‘suppliers’ of ‘cheap’ cars for breaking, which led to my misery,” Ndimba recounted. He had become a popular figure at Chitungwiza’s Chikwanha Shopping Centre after establishing a thriving garage.

“He used to buy stolen cars for as low as US$400 and cannibalise them for parts overnight.“I had a connection with thieves. They would supply me and several other guys with stolen vehicles, mostly at night. The vehicles would then be stripped for parts before daybreak.

“I had several selling points in Harare, which made it easy for me to sell quickly before the next delivery. I used to make huge profits.”

His windfall profits became his downfall.

He was arrested in 2014, convicted a year later and served a five-year jail term.

He is no longer interested in anything to do with cars, and is now a vegetable vendor.

Working on a tip-off, we approached some of the car dealers specialising in “hot” property.

We pretended that we needed to offload a Honda Fit that did not have proper documentation.

“Chindete ichi mdara, chinogonona kundinyudza (this is hot property that can get me into trouble with authorities). I can only buy it at a very low price because of the high risks involved,” bargained a car-breaker along Seke Road, just before Maruta Shops in Hatfield, who identified himself as Sam. He offered to pay US$630 for the car, even though it was in mint condition.

“Bring it at night. Diva will be here waiting for you with your cash,” instructed Sam.

His colleague from a nearby garage shared an interesting view.

“Small cars are easy to deal with. It would have been a different case if it was a big engine. Big cars not only attract attention but their owners usually prefer dealing with reputable spare parts dealers. This means I will be stuck with it for some time, which is not good for business,” he said. In Chitungwiza, we met Tafadzwa and presented him with a similar deal.

He almost took the bait.

“I usually do not worry about the papers since I have no plans of getting the car back on the road. However, we need to agree on a win-win price for this one,” he argued.

“Honda Fit spare parts are on demand. They are not difficult to sell. Normally one would need at least a week to dispose of the car parts,” he said. However, the deal fell through after he started suspecting us of being police details.

“I often deal with people that I know. I have never seen you before,” he queried.

In Highfield, at the ever-busy Gazaland Shopping Centre, we interviewed ‘friends’ of a popular dealer. “He does not go for every car. It has to be a small engine, preferably a Toyota or Mazda. What surprises us though is that he at times cannibalises for parts on cars that are in good working condition,” revealed Tapiwa.

In 2018, Chivhu-based Taurai Charamba lost his Mazda Demio to three criminals along the Chivhu-Bulawayo highway.

This was after he and his wife parked at a lay-by, leaving the engine running. While they took a rest, armed thieves emerged from the nearby thickets and drove away.

The vehicle together with other valuables in it was never recovered. Later that same year, in Beitbridge, a former Zimra officer had his Honda Fit stolen from a car park at night.

“I used a particular car park for close to two years without any incident. However, one morning I woke up to the shock of my life. My car was missing yet I had my keys with me! I made a police report and fortunately it was recovered four months later.

“The police found it dumped in Shangani without wheels. Reports from the police indicate it was used to commit crimes in Gweru,” revealed the former Zimra official. ZRP says members of the public always have to be wary.

“Some of the vehicles are lost due to negligence on the part of the owners as the vehicles are left with doors unlocked or criminals jump into cars left idling,” explained Asst Comm Nyathi. “…we are also carrying out awareness campaigns conscientising members of the public on the need to safeguard their vehicles through installation of alarms, tracking devices and other security mechanisms where possible.” The Sunday Mail

Police in running battles with “illegal” vendors at Mbare Musika

Two Chinese ‘agents’ charged in US for targeting…