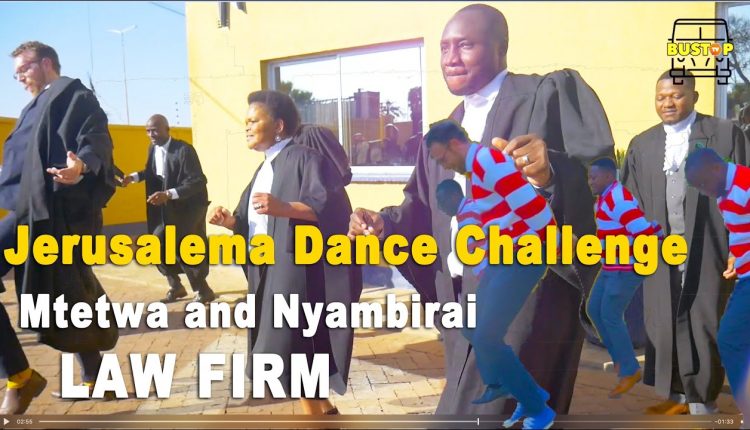 After almost two months of fighting President Emmerson Mnangagwa’s persecution of human rights activists and journalists in the country, Beatrice Mtetwa and her law firm have joined the viral Jerusalema dance challenge in what is being seen as a message of peaceful defiance.

Coltart took to Twitter to explain the jovial moments of dancing to the Jerusalema song, saying it was a message to Zanu PF’s under-fire administration that they were strong even after fighting with the state in courts persuading the judiciary to release political prisoners.

“Beatrice Mtetwa and her law firm have recorded the most wonderful statement of peaceful defiance against all that Zanu PF has thrown at them and their clients these last few months – a joyous rendition of the Jerusalema dance. Amhlophe one and all ! What a riposte!” Coltart said.

Mtetwa and Coltart among other lawyers within her firm under the direction of Zimbabwe Lawyers for Human Rights (ZLHR) spent 45 days defending Chin’ono and Ngarivhume, who had been incarcerated and detained at the country’s largest and most notorious jail, the Chikurubi Maximum Security Prison.

Three times they were denied bail in the country’s courts (two times at the Magistrate Court and one time at the High Court).

At one point, Mtetwa was barred by Magistrate Judge Ngoni Nduna from representing Chin’ono accusing her of criminalising the court with Facebook posts, allegations that she refused.

Many times, the lawyers clashed with the police, who claimed they were enforcing Covid-19 related lockdown regulations.

MDC Alliance Vice Chairman Job Sikhala was also arrested in connection with 31st July protests and charged with inciting violence. He is currently being detained at Chikurubi.

Meanwhile, in their Jerusalem dance they wore red and white striped jerseys in solidarity with all political prisoners.

“We love to dance at Mtetwa & Nyambirai. We’ve had a rough few weeks recently. So to let off a bit of steam we teamed up with @bustoptv to have a bit of fun and take up the #JerusalemaDanceChallenge.

“We stand in solidarity with all political prisoners unjustly incarcerated, denied their rights and made to wear these prison jerseys…and with the Zimbabwean people and all the oppressed people of the world struggling towards freedom. #AlutaContinua #ZimbabweanLivesMatter,” Coltart said.

Meanwhile the track, released in late 2019 and became an instant hit in South Africa has now gone global.

From transport industries and law firms in Zimbabwe, hospital hallways in France and Sweden, to roof tops, public places in Italy, Romania, the UK and Canada, the beaches of Cape Verde and in Jamaican compounds the Jerusalem Dance Challenge has hundreds posting videos on Facebook, Twitter and TikTok.

Man who broke into Eminem’s Clinton Township home told rapper he was there to kill him, officer says