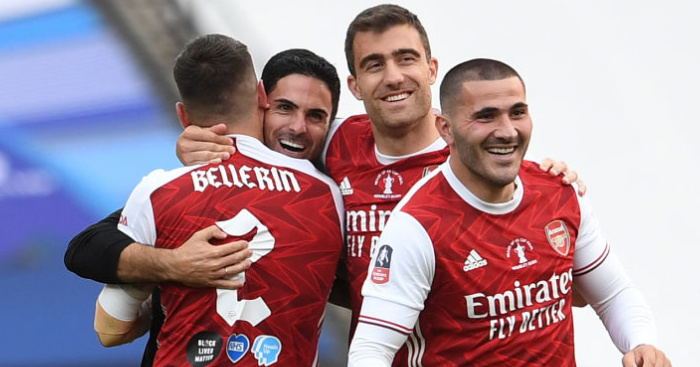 Mikel Arteta looks set to boost his Arsenal coffers to the tune of £65m – £70m with five Arsenal players close to leaving.

Arteta is overseeing his first summer transfer window in charge at the Emirates Stadium. The Gunners boss has already been busy – bringing in Willian with Gabriel Magalhaes following on Tuesday. The club have also already confirmed permanent deals for Cedric Soares and Pablo Mari.

Next on their wanted list is Atletico midfielder Thomas Partey. The Ghanaian, however, won’t come cheap with Atleti holding out for his €50m exit clause.

However, it seems Arsenal could well have secured enough cash to bring in Partey with three Gunners star poised to leave in the coming days.

As per il Corriere dello Sport, the first man set to leave is midfielder Lucas Torreira. The Uruguayan was a popular figure when he arrived from Sampdoria in 2018. However, he has failed to impress Arteta and a move back to Serie A is nearing.

As per the report, Fiorentina are on the brink of agreeing a €25m package with Arsenal to sign the 24-year-old. La Viola are set to pay Arsenal a loan fee of around €6m-€7m initially. That deal will contain an obligation to become permanent next summer for €18m.

Napoli chief Aurelio De Laurentiis, meanwhile, has confirmed his club are working on a deal to sign Sokratis Papastathopolous.

The Greece defender has been pushed way down the pecking order at Emirates Stadium after the arrival of Magalhaes and William Saliba.

The Gunners are said to be looking for a deal of around €10m for the former Borussia Dortmund man.Napoli are in the market for a new centre-half amid concerns that Kalidou Koulibaly is poised to leave for Man City.

De Laurentiis and Arsenal are currently locked in talks over the fee. And the controversial Napoli chief could not resist taking a swipe at the state of the current transfer market.

“Papastathopoulos? We are working on it, we are seeing,” he told Kiss Kiss Napoli, relayed by Sport Witness.

“The outgoing market is all laughter. In the cinema you are confronted with people with ten thousand balls. In the world of football the balls swell up, and everyone invents all sorts of balls.

“They’re blackmailers, but I’ve got calluses in them, and I’m swimming in the s**t I move. I’d like to see how shameless they want to get.”

Bellerin has been Arsenal’s first choice right-back for a number of years. He was, for a long time, considered a vital cog in their side.

However, the emergence of Ainsley Maitland-Niles has given Bellerin serious competition. It seems one of them will be sold off this summer.

Arsenal have already rejected a bid of around £15m from Wolves for the Maitland-Niles.

However, after his recent impressive displays in their side, Arteta may decide to keep him and sell Bellerin.

Sensing an opportunity, PSG have made an opening approach for the Spaniard.

Reports in France claim Arsenal have set the beaten Champions League finalists a €30m asking price for the full-back.

As per Paris United, PSG are ready to meet Arsenal’s asking price and talks are progressing over the deal. Personal terms are not expected to be a problem and a deal to take the Spaniard tot he French capital could go through soon.

The trio aren’t the only ones set to leave either. Rob Holding is thought to be closing on a loan move to Newcastle.

Meanwhile, our exclusive revealed Leeds are also tracking another Arsenal man after the Gunners named their price. Team talk

Arsenal ease to dominant win over ineffective and winless Newcastle