The innocent are persecuted, exposed to Covid-19 in prisons – Hopewell Chin’ono’s lawyer – VIDEO 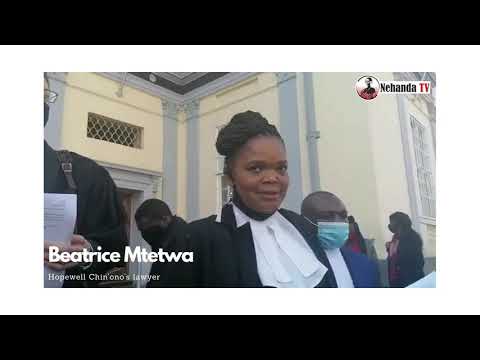 In Zimbabwe the innocent fighting corruption are getting more and more persecution and exposed to Covid-19 in prisons while the guilty are walking the streets with pockets lined from corruption, Hopewell Chin’ono’s lawyer, Beatrice Mtetwa said after he was denied bail by the High Court.

Mtetwa, Chin’ono’s lawyer expressed disappointment in the handling of justice by the High Court citing that her client was being persecuted for exposing corruption in Emmerson Mnangagwa’s under-fire administration.

Outspoken MP Job Sikhala pays the price of opposition in…

“We are extremely disappointmented and we are stunned that actually it was a denied bail which we all know in terms of the constitution, it is now an entitlement unless the state is able to prove compelling circumstances.

“I think everybody knows that the guilty ones are walking the streets and the innocent ones are being exposed to covid in the prisons.

“I’m absolutely disappointed, naturally because bail is an entitlement and the policeman who had the case conceded that he arrested Hopewell on a completely wrong understanding of the law. I’m naturally quite stunned by the decision,” Mtetwa said.

Chin’ono made waves recently after he exposed President Mnangagwa, his son Collins and his wife Auxilia in massive corruption, the US$60m Drax Covidgate scandal that saw the arrest and dismissal of former Health Minister Obadiah Moyo.

Moyo was arrested over the scandal, released on ZWL 50 000 bail and never entered the prison gate.

Chin’ono was arrested together with opposition Transform Zimbabwe leader, Jacob Ngarivhume ahead of the 31st July protests against corruption and charged for allegedly “inciting violence”.

On the day of the protests, the Zimbabwean police arrested scores of people who tried to hold peaceful demonstrations.

UK based academic and lecturer of law Dr Alex Magaisa said the Zimbabwe’s justice system was a “joke”.

“It’s turning the screws on a man who was unrelenting in his campaign against corruption. Justice system? It’s a joke. #ZimbabweanLivesMatter,” Magaisa said. Nehanda Radio

Mnangagwa has no power to “direct” Zacc like this – Magaisa