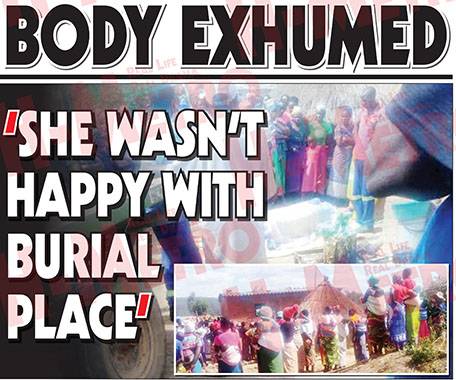 In a case of suspected juju use, a woman’s body was exhumed 17 days after burial and villagers were allowed to view it at a farm in Mashonaland East yesterday.

It is reported that the deceased, Tambudzai, was the second wife in a polygamous marriage in Mutoko and died two weeks ago.

Tambudzai is said to have suffered a miscarriage and a few weeks later, she died after she had started bleeding from the nose and mouth.

After her death, she was buried in Mutoko where she was living with her husband.

17 die in Mutoko head on collision…. seven others…

Tambudzai’s sister Juliet was the one who reportedly ‘saw’ her dead sister telling her that she wasn’t happy with where she had been buried and wanted to be buried next to her mother at Tamar Farm.

Juliet was reportedly ‘tormented’ by her sister until she made arrangements for the body to be exhumed and be reburied where the deceased wanted.

When H-Metro got there yesterday, the whole village were in awe and had gone to the second funeral in their hundreds to see if what they had heard was true.

“Nothing went wrong just as how she told her sister, the exhumation went well, the body was brought here without any hustles,” said one of the villagers.

At the funeral, Nyau dancers were leading the procession to the graveyard and the relatives said that was one of the deceased’s demands to her sister, that she wanted them to dance at her second funeral.

Tambudzai’s best friend was also there singing as she was instructed by her late friend when she visited her after her ‘first’ funeral.

As this news crew approached the funeral ceremony after the body viewing, the elderly man presiding over the procession chased away the news crew threatening them over their intention to publish the bizarre incident. H-Metro

17 die in Mutoko head on collision…. seven others seriously injured