Chinese telecoms company Huawei has said that disrupting its involvement in the rollout of 5G would do Britain “a disservice”. 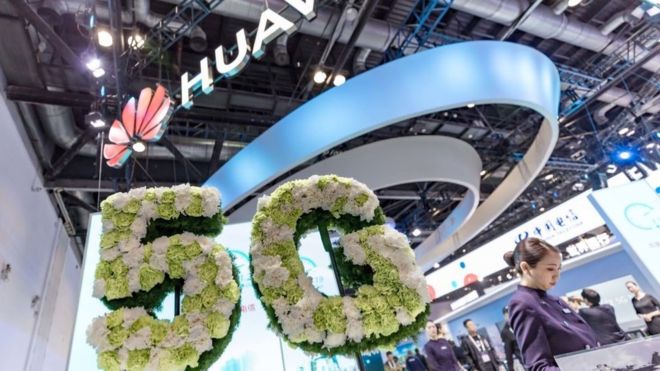 In January, the UK government approved a limited role for Huawei in building the country’s new data networks.

But in March, a backbench rebellion within the Conservative party signalled efforts to overturn the move.

In an open letter, the firm also said it was focused on keeping the UK connected during the Covid-19 crisis.

HS2: UK in talks with China over construction of high-speed…

US stocks rally on Huawei reprieve as pound gyrates on…

But the pandemic may increase pressure on the government to take a tougher line on the company.

In the letter, Huawei’s UK chief Victor Zhang says home data use has increased by at least 50% since the virus first hit the UK, placing “significant pressure” on telecoms systems.

Huawei says it has been working with partners like BT, Vodafone and EE to deal with the growth and has also set up three new warehouses around the country to ensure spare parts stay in supply.

Mr Zhang also says the current crisis has highlighted how many people, especially in rural communities, are “stuck in a digital slow lane”. And he warns that excluding Huawei from a future role in 5G would be a mistake.

“There are those who choose to continue to attack us without presenting any evidence,” he writes.

“Disrupting our involvement in the 5G rollout would do Britain a disservice.”

The government has banned Huawei from the most sensitive parts of the UK’s mobile networks, and limited it to 35% of the periphery, which includes its radio masts.

But critics argue it is a security risk to allow the Chinese company to play any role at all because of fears it could be used by Beijing to spy on or even sabotage communications.

In early March, 38 Conservatives MPs rebelled on the issue, a larger number than expected. That points to a potential upset when the Telecoms Infrastructure Bill comes before Parliament, which is planned to happen later in the year.

The coronavirus crisis highlights the tension between economic and national security issues that makes the topic so contentious.

On one side is the need for greater connectivity to boost economic growth. Supporters of Huawei’s role argue that excluding it would both slow down and raise the cost of delivering faster and more reliable networks.

On the other side is anger directed at China from some quarters because of its perceived mishandling of the initial Covid-19 outbreak, as well as the wider concerns over growing dependence on its technologies and companies.

Unnamed ministers and senior officials were recently quoted as saying there would have to be a “reckoning” once the current crisis is over.

Part of that could involve a reversal of January’s decision – a concern which may explain the decision to write the letter.

On 4 April a group of 15 Conservative MPs called for a rethink on relations with China in their own letter to the Prime Minister, written a day before he was admitted to hospital.

“Over time, we have allowed ourselves to grow dependent on China and have failed to take a strategic view of Britain’s long-term economic, technical and security needs,” the group wrote. Among the signatories were Iain Duncan Smith, David Davis and Bob Seely.

It is understood that Huawei waited until the Prime Minister was out of hospital before releasing its letter.

Harry Kane: Tottenham will not sell striker to domestic rival this summer

Linking coronavirus and 5G is “complete rubbish” and biologically…

HS2: UK in talks with China over construction of high-speed line