Police in Bulawayo arrested more than 700 suspected illegal forex dealers and vendors in a four-day blitz to restore sanity in the central business district of the city.

About 80 percent of the suspects have paid admission of guilt fines of up $500.

Police brought into the CBD a heavy deployment of officers on horseback, the canine section, plain clothes and uniformed officers to flush out defiant illegal forex dealers who had come back to the streets even after the first blitz on Tuesday.

Illegal forex dealers, popularly known as osiphatheleni, had been problematic in the city and countrywide, plying their trade in broad daylight without making attempts to conceal the activity, despite its unlawfulness.

Bulawayo police spokesperson Inspector Abednico Ncube in an interview yesterday said more sustained deployments were on the cards as police aimed to ensure that citizens complied with the law. 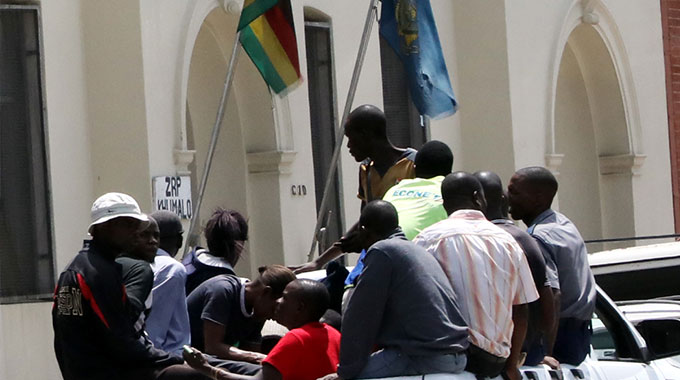 “By Friday we netted over 700 vendors and osiphatheleni in the CBD. The operation is an ongoing deployment to ensure sanity in town. More than 200 police officers flooded Tredgold area Chicken Inn, Herbert Chitepo and 4th Avenue and many other areas targeting osiphatheleni, vendors and illegal fuel dealers,” said Inspector Ncube.

“The officers included the Equine (horseback) Section, Canine (dog) Section, plain clothes and uniformed officers. All those arrested were taken to Bulawayo Central where more than 500 paid fines of up to ZW$500. More sustained deployments are on the cards and the best thing to do is for people to comply with the law,” said Inspector Ncube.

There was mayhem at the area surrounding Tredgold during the week when police officers swooped on osiphatheleni and unlicensed vendors, in apparently random but sustained and intense raids.

“As promised, we are working to restore sanity in the city. This is an operation by a team under the command of Chief Superintendent Marshal Dube, of Bulawayo Central District. The team arrested more than 150 osiphatheleni and many others who were blocking the pavement,” he said. “We are going to sustain our raids.

“We believe Bulawayo people are reasonable and we hope that the message will be heard. We want to protect property and life. We must all make Bulawayo a better place. Such levels of lawlessness cannot be tolerated,” said Inspector Ncube.

During a tour of Tredgold Buildings last week, Chief Justice Luke Malaba warned osiphatheleni and other people involved in illegal activities around the building which houses the Bulawayo Magistrates Courts, saying there was an urgent need for them to be permanently flushed out of the area.

At that time, police sealed off the parking area around the building but the operation was short-lived and illegal forex dealers made a triumphant return. The Chronicle