Elite football in Britain and across Europe’s major leagues has been suspended, with all football in England on hold until at least 30 April because of the coronavirus outbreak. 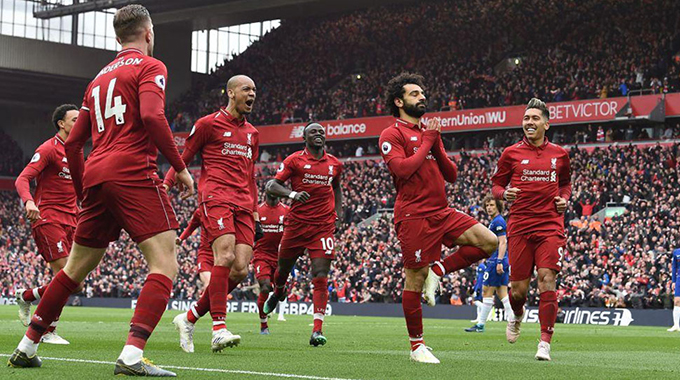 But with over three-quarters of 2019-20 having been completed, the numbers are there to be crunched to produce a confident simulation model for what the future may have in store.

Using the relative strengths of teams and 100,000 simulations, the Euro Club Index football ranking has provided BBC Sport with a scientific prediction of the remainder of the campaign, giving a final ranking and clubs’ percentage chances of finishing in certain positions.

Some of the outcomes won’t shock you, but there are a few interesting possibilities.

As long as this season is not declared null and void, as West Ham vice-chairwoman Karren Brady recently suggested should happen, Liverpool are going to be Premier League champions.

The Reds hold a 25-point lead over second-placed Manchester City, who have just 30 points left to play for.

No surprise then to find the Euro Club Index predicting with 100% certainty that Jurgen Klopp’s side will deliver a first title to Anfield in 30 years.

Not only that, but if their model is correct, the Reds will end the season with a record 102 points, beating the century that Manchester City racked up in 2017-18.

In truth, it is unlikely we will witness any last-gasp title drama in any of Europe’s top five leagues.

Current leaders Bayern Munich have an 84.37% chance of winning the Bundesliga, Italy’s top-placed side Juventus (83.98%) are almost certain to claim a ninth successive Serie A title, Paris St-Germain (99.98%) have France’s Ligue 1 all but wrapped up, while Barcelona (74.22%) are firm favourites to beat Real Madrid to La Liga’s crown.

In Scotland, Celtic’s 13-point advantage over Rangers means they have a 98.87% chance of winning the Premiership, although the latter will cling to that 1.13% until the bitter end.

The only thing seemingly standing in these leading sides’ way is, as Brady proposes, the season being written off.

However, with football authorities liaising regularly to assess the ever-developing situation, the overriding preference is for the current season to be completed.

The decision by Europe’s football governing body Uefa to postpone the European Championship until 2021 means the likes of Liverpool have more time to complete the fixtures that will surely result in them being rewarded for their stellar campaigns so far.

Man Utd make it but Blades miss out?

Where things are a bit more interesting is in the race to claim one of the four Champions League places in the Premier League.

The situation is complicated by Manchester City’s expulsion from the competition for two seasons – a punishment for breaking financial fair play rules that the club have appealed against.

Taking City out of consideration, the three teams most likely to join Liverpool at Europe’s top table next season are Leicester (94.81%), Chelsea (80.37%) and Manchester United (73.75%).

Wolves and Tottenham are the sides most likely to challenge this, but at just 17.34% and 16.24%, their respective chances of making the top four appear slim.

However, there is a silver lining for Spurs, who are predicted to finish a point and place above north London rivals Arsenal.

The model provides bad news for Sheffield United, who are five points behind fourth-placed Chelsea with a game in hand.

The Blades have been flying in the face of predictions throughout their return season to the top flight, though, so maybe we should not rule them out just yet, despite them being given just a 7.59% chance of finishing in the top four.

The Euro Club Index is predicting a worse fate for the two sides promoted alongside Sheffield United last season.

Norwich and Aston Villa are likely to be returning to the Championship according to the model, with the Canaries having an 89.93% chance of relegation.

Only goal difference separates West Ham, Watford and Bournemouth near the bottom of the table, but the Cherries are apparently the side most in danger of the drop.

Their 50.06% chance of relegation is significantly worse than the others’ percentages, although they can take heart from the fact it appears to be a six-horse race.

What about the Championship sides most likely to replace the top flight’s eventual bottom three?

Each have had their wobbles during the season, but current top two Leeds and West Brom can perhaps breathe a little easier knowing they are predicted with more than 92% certainty to be promoted.

Fulham look to be the only side that can challenge this, although at 10.62% the Cottagers’ chances of automatic promotion are slim.

We could witness one almighty tussle to claim the final play-off spot, with four clubs (Preston, Millwall, Bristol City and Cardiff) within a bracket of 22-31% of making it into the top six.

It will be some time yet, though, before we get to see the remainder of the season play out in reality.-BBC.