Flamboyant rapper Mudiwa Hood says he is overwhelmed by the number of people and organisations willing to help a teacher who went viral on social media for stealing maize cobs. 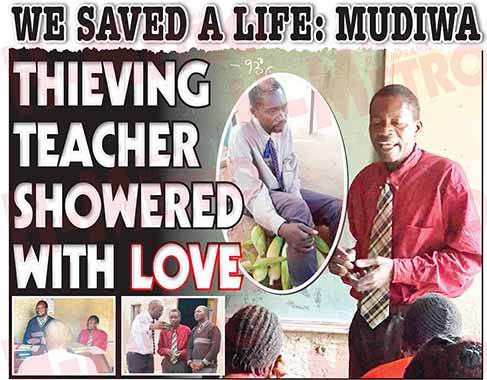 Chatikobo has been teaching at that school for close to two years now and credited for the institution’s good O’ Level results.

He was charged US$10 for the eight maize cobs he stole, a ‘fine’ which Mudiwa paid during his visit yesterday.

A number of well-wishers were contributing money using Ecocash while others, especially in the diaspora, offered to send the monetary contributions through Mudiwa.

“The support has been overwhelming and Busisa Moyo from United Refineries Limited pledged cooking oil and bath soap among their products. Chicken Hut want to host him for a lunch and then present him with a gift.

“Also, there is a farmer who wants to donate as many maize cobs as possible while over ZWL2000 has been sent via Ecocash by people on social media,” said Mudiwa.

In an interview with H-Metro, the Headmaster of Flaming Grace Christian College Faustine Svuure said Chatikobo is one of their best teachers.

While not condoning the crime, Svuure believes Chatikobo stole the green mealies as a way of trying to sustain himself.

“Chatikobo stays alone in one room a few kilometres away from the school.

“His wife and children do not stay with him, he stays on his own.

“He has an illness and that illness does not allow him to go for long without eating and taking pills,” he said.

Asked how he reacted when he saw the story about what Chatikobo had done, Svuure said he had a hard time believing it.

“When I saw the picture of Chatikobo I did not believe that it was him at first because I would never take him to be a person who steals.

“It took me a while to believe it was him until I recognised the clothes he was wearing and also the blue bag that he usually carries his books in to school,” he said.

“My wife and I have been helping him in any way that we can.

“When he first came to this school, my wife bought him shirts that he could wear to work and I also gave him some of my old suits and shoes and also bought him shoe polish,” he added.

Svuure said that Chatikobo had a history of being misunderstood at the schools that he previously taught at and being asked to leave.

“He had been chased from a few high schools because they did not understand him and also misread him. 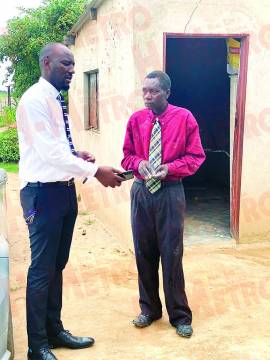 “He is one of my best teachers here and wants to introduce the students to pure sciences.

“He is a genius and you can see by massive improvement he has brought about with the results in the Science department.

“We are all a fan of one person, Jesus Christ and he teaches us the essence of forgiveness and giving people second chances.

“I believe that what this man did was an act of trying to ensure he takes his pills with no complications.

“I am not saying that stealing is good but when people turn to social media to shame a person for something like that it is very sad.

“The real criminals are being left out there yet people are shaming this man for only stealing maize,” he said.

Chatikobo told H-Metro that he had stolen the maize for a quick meal so that he could take his pills.

“I stay alone, my wife and children stay in Msasa with her brother’s children.

“I have been struggling a lot because I have three children who I have to pay school fees for and also have to cater for their well-being.

“My oldest child is doing Form Five now and I want to ensure that my children finish school but my finances do not add up,” he said.

“I did not have anything to eat at home so I stole the maize so that I could get home and cook and then drink my pills afterwards.

“I do not know why people concluded that I am from Mutoko, I only taught in Bindura.”

The headmaster then granted H-Metro an opportunity to go and observe Chatikobo teach his Form Three Science class.

After observing Chatikobo for a few minutes, Svuure revealed how the students love their teacher and say that he makes everything seem so easy and understandable.

“The students pleaded with me once that I should not chase Chatikobo from work for he had been absent for three days without telling us why.

“They said that they appreciate the way he teaches them and tries to make them understand each and every concept.

“I believe that under the right influence he can be a changed person who can be able to see his dream of teaching pure sciences through,” he said.

Chatikobo then also excused himself from the lesson and stepped outside where he assured Mudiwa in front of everyone that he would put the help that he gets to good use and will try to better himself also. H-Metro

‘Don’t get this kindness twisted’