Neighbouring South Africa has told President Emmerson Mnangagwa’s administration to stop political interference in public institutions, respect trade agreements and allow competition in business if it is serious about turning around the collapsing economy. 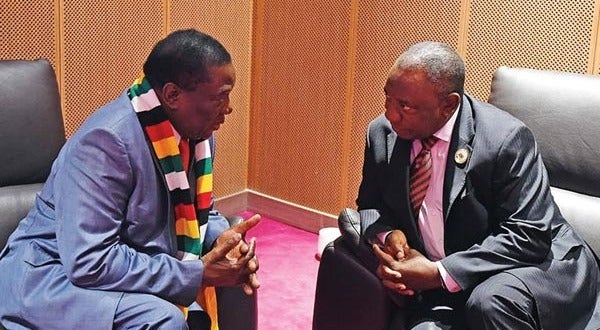 In a straight talk by South Africa’s ambassador to Zimbabwe Mphakama Mbete during the Political Actors Dialogue (Polad) economic summit last week, government was told not to tinker with important economic institutions for political gain.

“Public institutions are key to proper economic management and must be allowed to pursue their mandate in line with the policy framework and legislation that establishes them. These institutions are important to provide a stable and predictable economic environment for business to thrive,” Mbete said.

Business, particularly through Employers Confederation of Zimbabwe, has accused government of dragging the Reserve Bank of Zimbabwe into quasi-fiscal activities and allowing it to print or generate money for political expediency and resultantly undermine the local currency.

Mnangagwa’s government has been posturing, telling its African and international audiences that sanctions were affecting economic development in the country and hindering foreign direct investment (FDI), but Mbete sang from a different hymnbook.

“Zimbabwe has presented itself to be open for business, which we believe is an appropriate approach to developing this country and economy. However, in order to attract significant flows of direct investment, it is import that Zimbabwe improves its record concerning the following issues; security of tenure and investment protection; repatriation of proceeds by investors; the honouring of bilateral trade and investment agreements; the need to open up the economy to competition and establishment of new credibilities, lastly optimal debt servicing,” he said.

Zimbabwe has been writing laws to protect local industries from competition, especially by enforcing punitive import tariffs and closing out some sectors to foreign competition.

These include Statutory Instrument (SI) 64 of 2016, whose objective was to boost domestic production by protecting local industries from unfair competition from foreign firms.

The SI resulted in the removal of 43 products from the Open General Import Licence.

Zimbabwe, however, repealed SI 64, all its predecessors and consolidated their contents into SI 122 of 2017 with import controls, though relaxed, still haunting the nation.

The laws came under scrutiny after the country joined the African Continental Free Trade Area, which will remove economic borders and bring fierce continental competition.

Mbete told government that without addressing these issues, FDI would seek safer destinations.

“We believe that in a highly competitive environment for FDI, these are but a few of the basic conditions that must be upheld at all times. In our view, failure to do so means that investment capital will always look past Zimbabwe to other safer havens,” he said.

Touching on the core of economic decay, Mbete said the shortages of energy, fuel and water in Zimbabwe were not making matters any better.

“Zimbabwe has an industry base that has been neglected for long and needs reinvestment and re-calibrating. This neglect undermines government revenue collection potential since industry is operating below its potential. Industry and the economy by extension triumphs when basic services such as energy, fuel, water, bulk services, for example, are provided in a consistent and predictable way, this is essential for long-term planning by the productive sectors,” he said.

“We think it is important for all members of society to enter into a social contract wherein government, business, labour and citizens rally behind a common vision of the country of Zimbabwe.
Success requires mutual co-operation of all players as no one section of society can do it alone.”