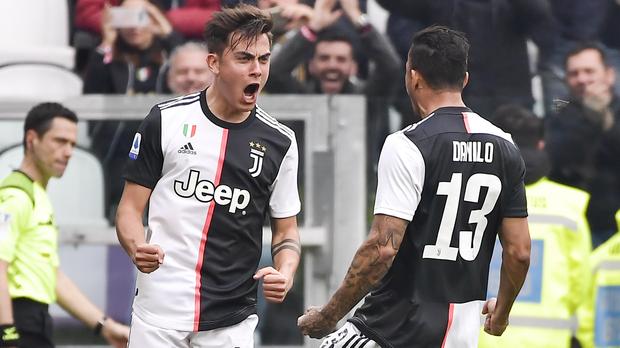 Goals from Paulo Dybala and Juan Cuadrado sent Juventus back to the top of the Serie A table with a comfortable 2-0 win over 10-man Brescia on Sunday.

Brescia striker Florian Aye picked up two yellow cards in three minutes near the end of the first half and Juventus immediately capitalised as Dybala whipped in the opener from a free kick.

Cuadrado doubled their advantage with a neat finish after 75 minutes, and the home crowd were given more reason to cheer when captain Giorgio Chiellini came off the bench to make his first appearance since rupturing his cruciate ligament in August.

Maurizio Sarri rested forward Cristiano Ronaldo, who has scored in 10 consecutive Serie A matches, and his gamble paid off as Juve eased to a win that moved them up to 57 points.

Super Mario urged to wake up

Shame on you, Balotelli lashes out in new Italy racism storm

However, Inter Milan will push Juve into second place on goal difference if they beat third-placed Lazio later on Sunday.

Sarri came in for criticism after a shock 2-1 defeat by Hellas Verona last weekend saw his side lose the Serie A lead to Inter, but they were rarely tested by relegation-battling Brescia at the Allianz Stadium.

The visitors lost goalkeeper Enrico Alfonso to a head injury early on, meaning Lorenzo Andrenacci was called on to make his Serie A debut, and their hopes of recording their first win at Juventus in Serie A took a blow when Aye was shown a second yellow for barging over Aaron Ramsey.

Dybala stroked the resulting free kick into the corner of the net, and Juve almost made it two when Andrenacci palmed a Daniele Rugani header onto the crossbar.

There were concerns for Sarri when substitute Miralem Pjanic limped off with a muscular problem, but Cuadrado put the result beyond doubt, exchanging passes with Blaise Matuidi before dinking home a neat finish.

Gervinho scored for Parma in a 1-0 victory at Sassuolo and Hellas Verona extended their unbeaten run to nine games with a 0-0 draw at Udinese. Reuters

Super Mario urged to wake up

Shame on you, Balotelli lashes out in new Italy racism storm