Tears flowed, the benefactor chose to stay away, fearing he would be choked by the emotions, as the CAPS United family staged an outdoor summer party in Harare yesterday. The occasion was to unveil the 45-seater luxury bus Nyasha Mushekwi bought for the Green Machine. 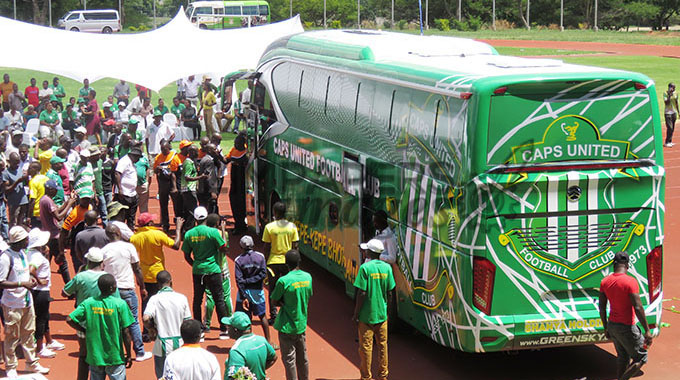 On a hot afternoon in the capital, in the shadows of the National Sports Stadium, CAPS United paraded their latest acquisition – delivered on their doorstep by their former son in a gesture which brought tears, for some, on a day of exploding emotions.

Domestic football has never seen anything like this and, 15 years to the year the Green Machine cried, after losing Blessing Makunike, Shingi Arlon and Gary Mashoko in that road accident, it felt good to see so many smiles from their constituency.

Of course, this was always going to be different. After all, no domestic footballer has ever invested so much in his former club, just to thank them for the part they played in his career.

Mushekwi initially spent US$120 000 on the customised coach, which comes with fittings like a toilet, an area where the players and coaching staff can have meals, and other luxuries. But, the cost of its clearance into Zimbabwe and transporting it from Durban to Johannesburg and then to Beitbridge, also brought the bill past the U$200 000 mark.

Yesterday, two days after its arrival in the capital, the CAPS United family finally cast their eyes on the bus.

Mushekwi didn’t attend the ceremony, withdrawing at the last minute, after getting concerned he would choke under the emotions and worried he would steal the thunder from the occasion.

Instead, the star of the occasion was his witty grandmother, Laizah Mushekwi, who – for about 20 minutes – held the guests spellbound with her story.

“I didn’t want him, nor any of his siblings to play football, I feared that he could get injured,’’ she said.

‘‘I used to read and hear so many bad stories of footballers who got some permanent injuries, so to me, the sport was a no. He knew that I didn’t want him to play football, so he would hide his soccer boots in a satchel and would lie to me that he was going to search for a job in town yet he was already playing for CAPS United.

“But, one day, CAPS United authorities drove him home in a plaster, after he had broken his leg. I decided not to lash him but instead I prayed for him.

‘‘Miraculously, he healed in a matter of two months though the injury had initially been expected to heal in six months. He went back to CAPS United against my will as soon as he recovered. That had become his way to avoid conflict with me.”

Even when the opportunity to play in South Africa availed itself, Mushekwi still had to cook up stories to avoid his grandmother’s wrath. Method Mwanjali even lied to Mushekwi’s grandmother the striker was going to South Africa to look for a job.

“I only got to know that Nyasha was now playing football in South Africa when their match was broadcast on television though his siblings had tried to hide it from me saying it was someone else from Mbare who looked like Nyasha,” she said.

‘‘Then, he scored, and they forgot they had lied to me as they all screamed, ‘Nyashaaaa, Nyashaaa,’ that’s when I got to know he was playing football there.’’

Mushekwi might not have graced the occasion yesterday but his name dominated the proceedings. He asked CAPS United to do one more thing for him this season – win the championship for the fans.

Club president, Farai Jere, who was praised by Mushekwi in a speech read on the striker’s behalf by his sister Nyari, for keeping the Green Machine going in this tough economic climate, said he had already passed on the message to the team.

‘‘I know where Nyasha Mushekwi came from,’’ said Jere.

‘‘He approached me. I took him to our coach then, Moses Chunga. The latter, knowing him, he believes in what he sees. We are so excited, as CAPS United, to find just one kid who remembers where he came from. This is historic, not only for CAPS United but at national level, there is no one who has done that.

“He is a well-nurtured child, well-mannered and remembers where he came from. This is the best bus in the Premiership. We are so humbled, we are happy for this boy, we pray for him.

“Some of us are not even able to take care of our parents. But, he remembers a club which shaped his career.”

ZIFA board member, Sugar Chagonda, who stood up for guest of honour and the association’s president Felton Kamambo, challenged other players to emulate Mushekwi.

‘‘I would like to urge other teams to do as well as CAPS United are doing. Mushekwi has shown others the way and it is always good to have as many players as possible who remember where they came from.’’

The green carpet occasion was attended by former and current CAPS United players, including those who won the league titles in 1996, 2004, 2005 and 2016, fans and the Green Machine partners. The Herald

‘This is a God-given gift, it has nothing to do with Nyasha’