Comedian Nish Kumar was booed off stage after making Brexit jokes at a charity event on Monday night. 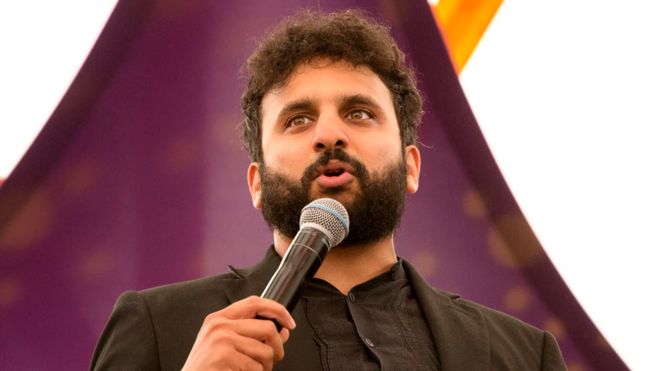 “You are the only audience in my entire 13-year history of performing that have actually thrown something at me,” Kumar said, after a bread roll hit the stage.

Radio 1 DJ and Taverners’ ambassador Greg James said the behaviour of some of the crowd was “appalling”.

James added he was “embarrassed to be there”.

The event, at London’s Grosvenor House, was raising money to give vulnerable children a start in life through sport.

Speaking to The Guardian on Tuesday, Kumar said: “I made what I considered to be some extremely mild jokes about Boris Johnson, Jacob Rees Mogg, Theresa May and the Brexit process for not going well.”

He said the audience was more “easily offended” than he thought they might be.

Video footage of the event showed Kumar being interrupted by hecklers, one of whom shouted “don’t do politics”.

“It’s an election season and I thought it would be interesting to spark a conversation here,” explained the comedian, “but clearly the conversation I’ve sparked is, ‘this guy is a bit of a dickhead.’

“I did think it would be nice to come here and talk to some people who had a different political outlook to me, and I thought it’d be interesting for me to share my perspective – but clearly that’s not been the case.”

He added: “What I don’t want to do is to detract from any of the fantastic work done by the charity,” for which he received a round of applause.

‘Not gonna leave’
But as the routine continued, the audience began a “slow clap”, after which Kumar refused to leave the stage.

Kumar was eventually joined by the host of the event, who escorted him off stage.

“Can I shake your hand, sir?” he asked. “Ladies and gentlemen, Nish gave his time to come and support this charity today, and I think the very least we can do is say thank you for doing that.”

Afterwards, the comic took to Twitter to make light of the crowd’s reaction.

Reflecting on the incident, he told the Guardian: “I’m sort of amazed by how fascinated people are by the whole thing. It’s not the first time I’ve been booed off stage … I consider it the life of being a comedian – they have a right to boo me.”

Lord’s Taverners said in a statement: “This event alone raised a staggering £160,000, which will go towards helping to empower disadvantaged and disabled young people to fulfil their potential through sport and build foundations for a positive future.

“We are not, and never will be, a political organisation and we don’t endorse the views of the guest speakers at our events, which are their own.

“However, nor do we endorse the reaction of a minority of audience members at yesterday’s event.

“Nish Kumar’s attendance was arranged in good faith and he gave his time for free to support the charity and our work. He follows a long tradition of comedic special guests at the event.

“We are extremely proud that in the past year we have raised over £4m, with nearly 12,000 young people having participated in our cricket programmes all over the UK, and just over 31,000 items of sports kit having been recycled across 20 countries. We will continue to focus all our efforts on developing sporting chances for young people in 2020 and in many years to come”. BBC News