Veteran actress Rhodha “Mai Sorobhi” Mthembe may be down, but she is certainly not out. 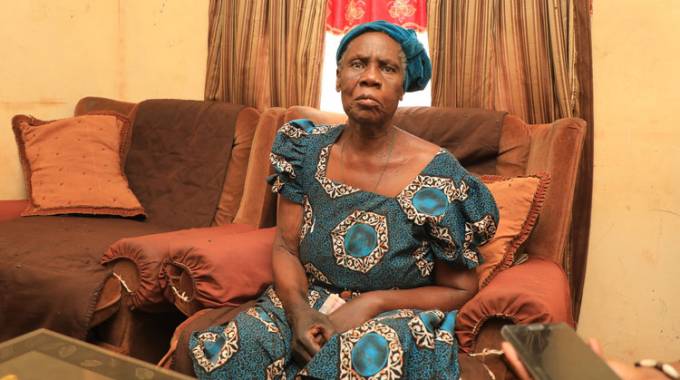 A year ago, Mai Sorobhi suffered a stroke which partially paralysed her left side.

At some point, she fell on hard times and had to depend on well-wishers.

But the seasoned actress, who made a name for herself as Phillip “Paraffin” Mushangwe’s wife in the popular drama series “Paraffin”, said not even failing health will take away her love for the small screen.

The actress’ passion for acting remains intact. In fact, Mai Sorobhi is actively searching for fresh roles on television. She also feels that she is now ripe for a directorial role due to her experience in the industry.

“I was born an actress and I cannot do away with this part of my life for any reason, health included. Right now, I am ready to take up new roles. I can even direct plays as I have acquired enough experience,” she said.

The veteran actress still has her old touch. She remains a bubbly, hilarious, candid and easy-going character.

During an interview with The Sunday Mail Society, Mai Sorobhi cracked several jokes and made light of her situation, which is clearly dire.

“Kana ipo pano ngachitotsva nekuti zvichirimo (Even now, let’s get down to it because I’m still adept),” she said with a chuckle.

Mai Sorobhi started acting during her school days at Mutambara Primary and Secondary schools in Mutare.

More than a decade later, she broke into professional circles through “Paraffin”, a drama that propelled her to national acclaim.

Her role in the drama series was so financially rewarding that she, together with her late husband Vaxison Mthembe, bought their Kuwadzana Extension home.

Mai Sorobhi feels that the stroke that has afflicted her came at the wrong time as she has lost her husband as well as her friends Mushangwe and Lilian Mbirimi from the “Paraffin” cast.

Without a shoulder to cry on, she feels that bottled up stress culminated into a stroke.

She remembers how her daughter’s illness shortly before the stroke also gave her sleepless nights.

“Nomatter is my sixth born child. She lives in South Africa and is the one who sees to my welfare. When she fell sick, I got stressed up, wondering how I would survive if she died. We are very close.”

On the day she became paralysed, Mai Sorobhi was at home and her other daughter, Charity, had briefly gone out. She describes having a strange sensation as she was cleaning up after breakfast.

“I felt as if I had been electrocuted,” she recalled.

At the time, she did not realise that she had just had a stroke.

The popular actress describes the time she was admitted at Harare Hospital as the worst days of her life.

Doctors had to take her through counselling sessions as her blood pressure remained high, thereby posing a threat to her life.

While she is yet to fully recover, Mai Sorobhi still has good memory, a sharp eye for scrutinising things and some intelligence to spice it all up.

She says she was heartbroken when he was hospitalised a few weeks back.

She believes Gringo can still reach dizzy heights in acting.

“He has so much to offer. Given the resources, Gringo can make a great difference in the industry,” said Mai Sorobhi, adding that she wishes to pay him a visit despite her own health woes.

Whenever she can, Mai Sorobhi watches some local television dramas and feels that she can contribute to the growth of the industry.

She believes that the current crop of actors needs to go back to the basics. Sunday Mail

Ex-president Mugabe’s riches to be made public