UK would be ‘outgunned’ in Russia conflict – think-tank

British ground forces would be “comprehensively outgunned” in a conflict with Russia in Eastern Europe, according to a defence think-tank. 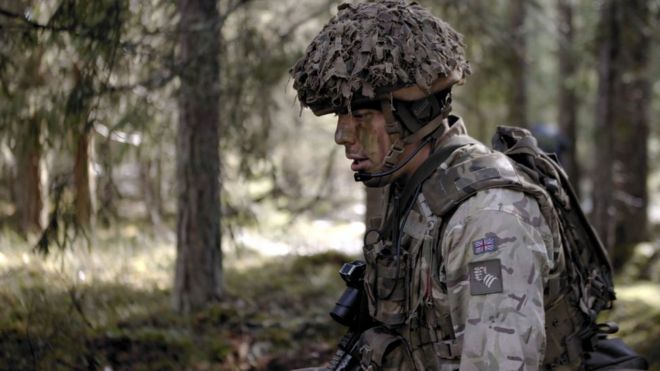 Research by the Royal United Services Institute (Rusi) found that the Army, as well as Nato allies, has a “critical shortage” of artillery and ammunition.

It concluded that it could not maintain a credible defence position.

The Ministry of Defence (MoD) said the UK works closely with Nato and is “well equipped to take on a leading role”.

The research comes ahead of a meeting of Nato leaders in London next week to mark the 70th anniversary of the alliance.

African frontline workers ‘must be heard’ in UK…

The UK, along with other Nato members, has positioned military forces in Eastern Europe to deter any potential Russian aggression in the wake of Moscow’s annexation of Crimea in 2014.

Around 800 British troops are currently stationed in Estonia. The first were sent in 2017.

But the study by Rusi found that the UK armed forces lack critical firepower compared to Russia’s military.

It analysed military capabilities in the “unlikely” context of “a high-intensity conflict between Nato and Russia, in which the UK has promised to deliver a warfighting division”.

“At present, there is a risk that the UK – unable to credibly fight – can be dominated lower down the escalation ladder by powers threatening escalation,” the report said.

Russian artillery and rocket batteries have already proved to be potent, destroying two Ukrainian battalions in 2014 within minutes.

UK and other Nato forces not only have a limited number of artillery pieces, but also a shortage of munitions stockpiles and transportation.

The report said the “rejuvenation and modernisation” of Britain’s ground-based artillery is an “urgent and critical priority”.

In response, the MoD said: “The UK does not stand alone but alongside its Nato Allies, who work closely together across air, sea, land, nuclear and cyber to deter threats and respond to crises.”

It added: “As the largest Nato defence spender in Europe, the UK’s armed forces are well equipped to take a leading role in countering threats and ensuring the safety and security of British people at home and abroad.”

The statement comes less than three weeks after French President Emmanuel Macron described Nato as “brain dead” – stressing what he sees as waning commitment to the transatlantic alliance by its main guarantor, the US.

MoD figures released in August found that the size of Britain’s armed forces had fallen for a ninth consecutive year.

The finding came just six months after the Commons spending watchdog, the Public Accounts Committee, claimed the MoD had a funding black hole of at least £7bn in its 10-year plan to equip the UK’s armed forces.

The visit was in line with the UK’s obligations to the Vienna Document which aims to promote mutual trust and transparency among states signed to it.

It came as UN Secretary General Antonio Guterres claimed the Cold War was “back with a vengeance” as he warned abut the dangers of escalating tensions over Syria. BBC News

African frontline workers ‘must be heard’ in UK inquiry