Manchester City boss Pep Guardiola says his side can now focus on the Premier League after qualifying for the Champions League last 16 with a group match to spare.

Ilkay Gundogan scored as City drew 1-1 at home against Ukrainian side Shakhtar Donetsk, a result that ensured Guardiola’s team would finish top of Group C.

“The target was to qualify and we have done it,” said the Spaniard, who won the Champions League twice when in charge of Barcelona.

“The group stage is always tricky but now we have one competition already done – we play the last game qualified as first in the group – so we can focus on the Premier League until we arrive in the cups.”

City, who have won the Premier League in both the last two seasons, are currently third domestically, nine points behind leaders Liverpool.

As they are still in the Carabao Cup, Guardiola’s team will be playing nine times between 30 November and 29 December, although they can now rest players for their last Champions League group game, away in Croatia against Dinamo Zagreb on 11 December.

Gundogan gave City the lead after half-time, side-footing home after some fine footwork from Gabriel Jesus gave him the space to finish.

But Shakhtar, who had shipped 12 goals without reply in their past three meetings with City, stayed in the game and substitute Manor Solomon levelled with his first touch when he met Dodo’s pull-back from the right.

City, missing record scorer Sergio Aguero with a thigh injury, were not at full flow going forward despite Kevin de Bruyne’s energy in midfield and the industry of Jesus in the final third.

The Brazilian striker did not manage a touch inside the Shakhtar area in the first half, and his only efforts at goal were a tame header and a shot that was blocked.

His hard work did create chances for others, however, and, as well as teeing up Gundogan’s goal, he set up substitute David Silva for a shot that was cleared off the line.

That was the closest City came to a winner in the final 20 minutes and an unimpressive attacking display petered out completely before the end, with the crowd unable to lift the home side.

City’s poor performance in front of goal did not bode well for the next few weeks while Aguero is absent, but they still achieved their twin objectives for the evening, with Atalanta’s 2-0 win over Dinamo Zagreb meaning they cannot be caught going into the final round of group fixtures.

What was expected to be a procession against a team City beat 6-0 here 12 months ago, turned into a night of frustration for the hosts and their fans.

De Bruyne did his best to get his team going with some probing runs from midfield and trademark whipped crosses from the right, but his final ball was often blocked and never fell for a team-mate.

There was also no lack of effort from Jesus, who scored a hat-trick when Shakhtar were last at the Etihad, but his work early on was limited to outside the opposition area.

He did make more runs into the area after the break and was unlucky not to get on the end of another fizzing De Bruyne delivery when Shakhtar keeper Andriy Pyatov dived at his feet, but rarely looked like scoring.

Jesus still came away with an assist on his return to the starting line-up, but the 22-year-old has found the net himself only once in his last 10 appearances in all competitions and badly needs a goal.

More gaps at the back after Ederson mistake

Ederson, who had come off injured early in that game, did his best to inject some early drama this time too, dashing from his line and completely missing the ball out on the left.

Mateus Tete collected it and cut in looking to take advantage, but Fernandinho dashed back to block his goalbound shot.

That was City’s first scare down their left but it was not their last – with left-back Angelino defending very narrowly, Shakhtar frequently looked to expose him with Dodo overlapping on the outside.

It was a tactic that almost paid off before the break when Alan Patrick fired wastefully over from a Dodo cross, but Solomon made no mistake when a similar opportunity fell his way. 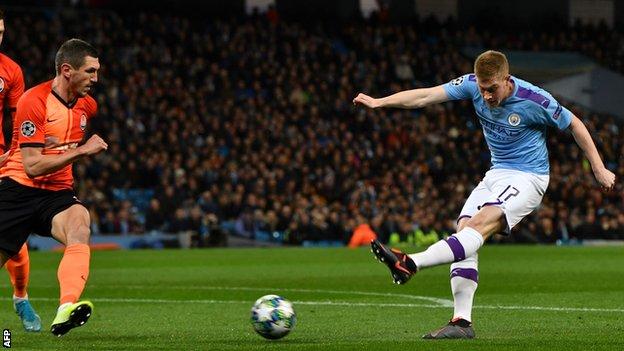 City wrap up their campaign in Group C with a trip to Croatia to play Dinamo Zagreb on Wednesday, 11 December (17:55 GMT). They will find out their last-16 opponents five days later when the draw for the knock-out stages is made in Nyon, Switzerland.

Their next test in the Premier League is away at Newcastle on Saturday (12:30).

It’s a pity Billiat never got a chance