Mother of the Churchill high school boy who jumped to his death four weeks ago at the Julius Nyerere Way Parkade says she is traumatised following leaked social media comments accusing her of pressurising her son to death. 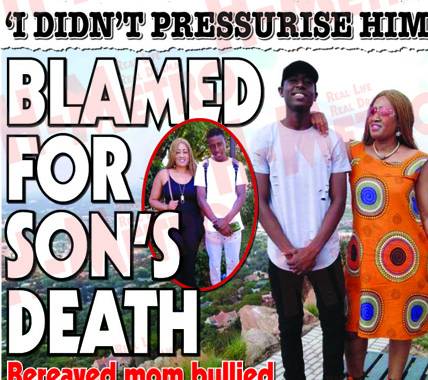 Jessica Jacobs the mother to the 18-year-old boy who committed suicide at the parkade in October spoke to H-Metro from her home in South Africa and revealed leaked WhatsApp group chats which blamed her as the reason of his son’s death.

Jacobs came across social media chats which involved parents who insinuated her as an irresponsible and unfit mother who failed to raise her son.

“I’m quite disturbed over social media messages which a friend sent to me coming from Riverton Academy school parents’ WhatsApp group in Masvingo where they were discussing how I put pressure on my son which led to him committing suicide.

“People shouldn’t just start judging people without even knowing where they’re coming from, mwana aiterera and I just want him to rest in peace.

“You see, the death of his dad triggered his depression because he was very close to him.”

Her sentiments follow speculations which circulated on social media the day her son died as some said he committed suicide after she impregnated a girl while others pointed to drugs.

“He enrolled at Churchill in boarding school to do sciences.

“He started having challenges which I investigated, and it happened to be bullying then I took him out of boarding.

“I got him private tutors too.

“When he started mentioning about the fear of failing exams, we sat him down with his brother.

“The brother explained to him how he failed ‘A’ levels twice and how I was supportive of him until his completion of a degree.

“We brought him here in SA to seek medical attention with psychologists.

“I went to Dubai and did shopping for him. I wanted to make him happy and I even went to his school to request for a transfer so that I’d take him with me back to SA to continue counselling with psychologists.

“I was checking up on him and all was well.

“The very day he committed suicide, I texted him and the previous night we spoke on the phone; he was happy.

“All I can say is depression is a mental issue which needs medical attention and we just did that by taking him to the hospital where he got medication.”

Jacobs added that she is now undergoing counselling sessions due to depression. H-Metro