Zimbabwe police with riot gear fired tear gas and struck people who gathered on Wednesday to hear a speech by the country’s top opposition leader amid growing frustration with the collapsing economy. 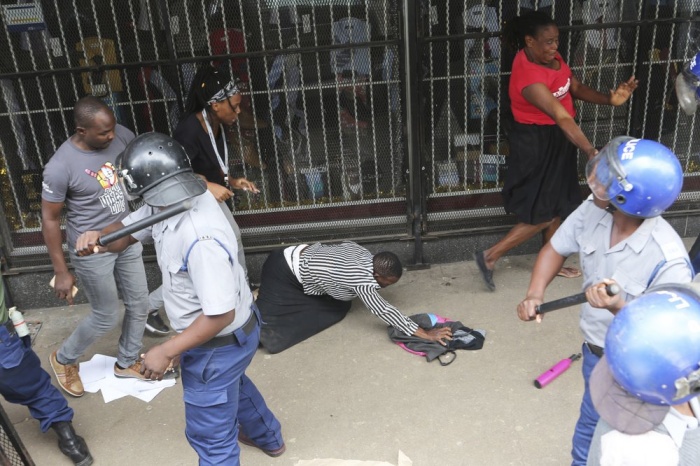 Dozens of people ran and dodged baton blows in the capital, Harare. Officers cordoned off the Movement for Democratic Change party headquarters ahead of Nelson Chamisa’s speech and patrolled with water cannons.

Public discontent has grown in Zimbabwe with President Emmerson Mnangagwa, who has struggled to fulfil promises of economic prosperity and more political freedoms. The health system has largely collapsed amid the worst economic crisis in more than a decade.

Chamisa continues to dispute his narrow loss to Mnangagwa in last year’s election.

After some of his supporters were left injured and bleeding on Wednesday, he told the gathering that “Mnangagwa has scaled new levels of dictatorship. Our country is burning … Why would you beat people who are at their head office? Is the MDC now a banned party?”

The opposition leader repeated demands for dialogue to form what he called a “transitional authority” tasked with carrying out democratic reforms and a credible election.

Only pro-government marches have been allowed in recent months, while similar moves by the opposition, labor and human rights groups have been met with strong police action.

Police denied accusations they had banned this latest event. Spokesman Paul Nyathi said police and opposition organizers agreed to move the event to a venue on the city’s outskirts.

The opposition said it had a letter confirming the ban. The latest actions “show how democratic space is still suppressed just like during Mugabe’s time,” said spokesman Luke Tamborinyoka, referring to the late Robert Mugabe, the former longtime leader who was forced to step down in 2017.

Some Zimbabweans allege that repression is now worse than under Mugabe, who oversaw widespread rights abuses that led to international sanctions against individuals including Mnangagwa.

Also on Wednesday, treason charges were dropped against outspoken pastor Evan Mawarire after he was accused of plotting to overthrow the government during protests over the economic crisis early this year, Mawarire and the lawyers’ group said.

Frustrations remain high as the economy crumbles. The country’s inflation was last calculated at 300% by the International Monetary Fund in August, the second highest after Venezuela.

Mnangagwa has pleaded for more time, saying austerity measures he introduced mean things will get worse before they improve.