Three people died, two of them relatives to the late national hero Sikhanyiso Ndlovu when the vehicle they were travelling in veered off the road and overturned along Khami Road. 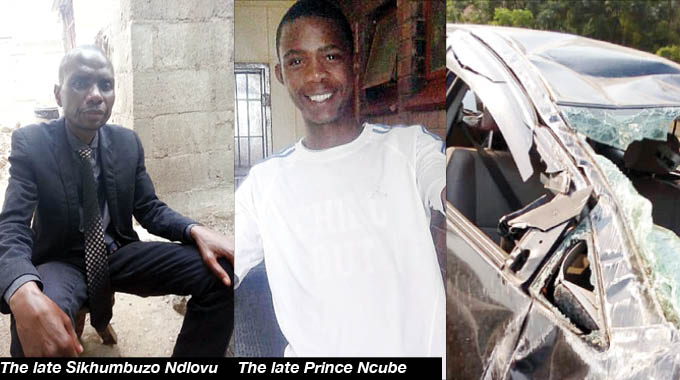 Brother to the late national hero, Sikhumbuzo Ndlovu (62), his nephew Prince Ncube and their neighbour Mthulisi Dumane all from Mpopoma suburb died after Ncube lost control of his Toyota Wish on Sunday after midnight. A fourth person who was not named, sustained injuries.

Dumane was buried yesterday at a local cemetery while Sikhumbuzo and Ncube are set to be buried on Saturday.

Bulawayo police spokesperson Chief Inspector Precious Simango confirmed the accident saying it could have been caused by failure to control the car.

Horror crash on road to Johannesburg

“Preliminary investigations are that the now deceased Prince Ncube was driving a Toyota Wish with three passengers on board.

“The driver failed to negotiate a curve along Khami Road and lost control of the vehicle which veered off the road, overturned before rolling several times and landing on its side. The driver and one of the passengers died on the spot while the other passenger died at Mpilo Central Hospital.

“The other passenger was also admitted to the hospital after he sustained injuries,” said Chief Insp Simango.

The Ndlovu family spokesperson, Mr Simangaliso Ndlovu confirmed that two of the deceased died on the spot.

“My brother Sikhumbuzo could not get treatment at Mpilo Central Hospital as doctors are on strike. He was only attended to by nurses.

“We expect to bury the two on Saturday and we are planning to have a joint burial service at UCCSA Njube on the day before proceeding to Athlone Extension Cemetery for burial,” said Mr Ndlovu.

He said mourners are gathered in Mpopoma suburb and on Tuesday the Minister of State for Provincial Affairs Bulawayo Cde Judith Ncube visited the two families to pay her condolences. The Chronicle

Horror crash on road to Johannesburg