Government has designated the 50 hectare-plus piece of land allocated to Karo Zimbabwe Holdings for platinum exploration and mining in Selous into a Special Economic Zone (SEZ). 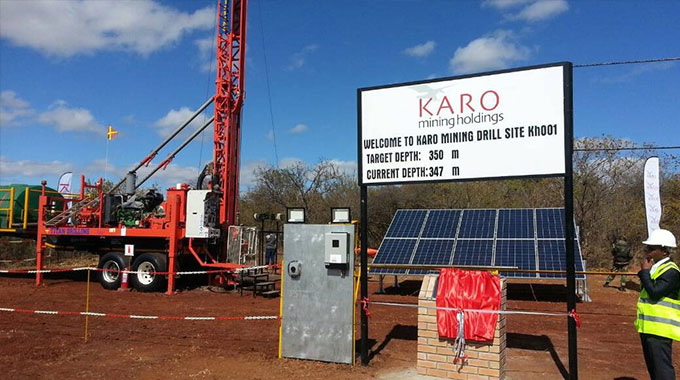 “The zone is located on certain pieces of land covered by special mining grants issued to a subsidiary of Karo Zimbabwe Holdings (Private) Limited. With the declaration of SEZ status, Karo Zimbabwe and its licensed subsidiaries will be entitled to several fiscal incentives that further enhance the economics of the project including reduced tax rates, duty free importation of raw materials and equipment and exchange control rulings,” it said.

Recently, Karo Zimbabwe completed a 238 borehole, 32,4 kilometre-Platinum Group Metal drilling programme on the property situated on the Great Dyke of Zimbabwe, with the drilling focused on the western boundary of the licence to average depths of 50 metres to 150 metres.

Karo Zimbabwe is on track to deliver a resource statement before the end of the 2019 calendar year. Commenting on the awarding of the SEZs status, Tharisa chief executive officer Mr Phoevos Pouroulis said: “Zimseza’s award of the SEZs status to Karo’s licence in Zimbabwe is a critical step in the development of what could become a world class vertically integrated PGM operation.

“The Karo mine could transform the Zimbabwean PGM sector, bringing significant economic benefits to all stakeholders and building a long-term sustainable mining industry.

“The SEZs status, as well as the completion of the initial resource classification, are key milestones prior to investing in the various phases that a project of this scale requires for it to succeed.”

Karo Resources’ project in Zimbabwe seeks to establish a large scale vertically integrated Platinum Group Metals (PGMs) mining complex, located in the Great Dyke in Zimbabwe. The platinum producer is expected to design and construct fully integrated facilities to ensure maximum extraction of value from mining, through the value chain to final base metal and precious metal refining.

The project is based on proven technologies and industry best practices and thus Karo Mining Holdings will execute the project in partnership with the Government under the Investment Project Framework Agreement the parties signed in March last year. The Chronicle