Hong Kong’s embattled leader abandoned a State of the Union-style speech on Wednesday after she was heckled by rowdy opposition lawmakers during chaotic scenes inside the city’s legislature.

The speech by chief executive Carrie Lam was billed as an attempt to win hearts and minds after four months of seething pro-democracy protests.

But it instead laid bare the intense polarisation coursing through the semi-autonomous financial hub after weeks of huge and increasingly violent rallies.

Lam, who has historic low approval ratings, tried twice to begin her policy address inside the Legislative Council which had opened for a new session some three months after it was trashed by masked protesters.

Scores test positive for Covid-19 on India flight to Hong…

Beijing likens Pompeo to a ‘mantis’ after latest…

But pro-democracy lawmakers, a minority of the pro-Beijing stacked legislature, shouted her down.

One used a projector to broadcast protest slogans behind Lam as she stood on the podium, and later donned a face mask of Chinese President Xi Jinping.

Lam instead released a pre-recorded video, the first time a Hong Kong leader has been unable to deliver the annual address in person since the tradition began in 1948.

In it, she announced plans to increase housing and land supply in a city that has one of the least affordable property markets in the world, as well as various subsidies.

“I firmly believe that Hong Kong will be able to ride out this storm and move on,” she said.

But the announcement gave no concessions to protesters and was quickly dismissed by pro-democracy advocates.

“So much has happened on Hong Kong’s streets over the past four months but Lam has been either hiding in her abyss or acting like a wax figure,” pro-democracy lawmaker Tanya Chan told reporters.

Pro-Beijing lawmaker Regina Ip criticised her opponents for forcing Lam from the podium.

“I think that my pan-democrat colleagues insulting, screaming, jumping onto the desk to prevent the Chief Executive from delivering the policy address is shameful and should be condemned,” she told AFP.

Willy Lam, a politics expert at the Chinese University of Hong Kong, said Lam’s speech would do little to quell protests which are fuelled by years of anger over sliding freedoms and the inability of Hong Kongers to elect their own leaders.

“Carrie Lam is following instructions from Beijing,” he told AFP.

“Even the economic handouts do not seem to be particularly impressive and they take will take a few years to actually materialise.”

Millions have taken to the streets of Hong Kong, initially against a now-dropped bid by its leaders to allow extraditions to the authoritarian Chinese mainland.

But after Beijing and Lam took a hardline the movement snowballed into a broader push for democracy and police accountability.

Activists say freedoms are being eroded by Beijing, contrary to a deal that outlined Hong Kong’s 1997 return to China from British colonial rule. 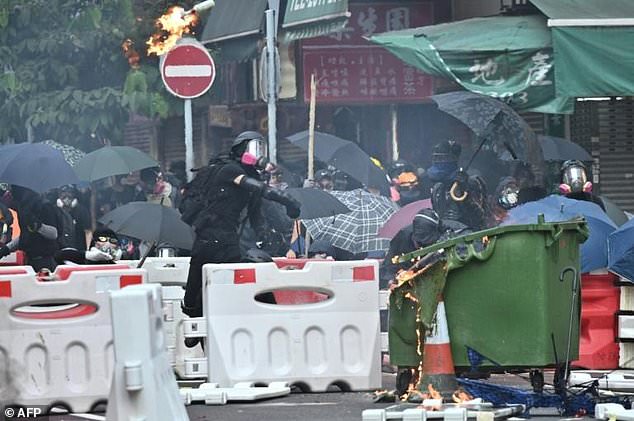 Protesters have said they will only end their huge rallies if core demands are met, including an independent inquiry into the police, an amnesty for the more than 2,500 people arrested and universal suffrage.

Both Lam and Beijing have repeatedly dismissed those demands and say Hong Kong’s freedoms are being protected.

Lam’s speech comes after the US House of Representatives passed a bill late Tuesday that aims to defend civil rights in Hong Kong and has drawn rare bipartisan support in a polarised Congress.

China, which has accused “external forces” of fuelling weeks of unrest in the city, expressed its “strong indignation” over the bill and told Washington to “stop meddling”.

The Hong Kong Rights and Democracy Act would link the city’s special trading status with the United States to an annual State Department certification that authorities are respecting human rights and the rule of law.

It would also require the US president to identify and sanction the people responsible for the erosion of autonomy and serious abuses of human rights in Hong Kong.

The House also approved a related bill to prohibit the export of certain non-lethal crowd control items such as tear gas to Hong Kong. AFP

What next for Tunisia’s new president?

Beijing likens Pompeo to a ‘mantis’ after latest US sanctions