Benjani hailed by fans for celebration in Vincent Kompany testimonial

Manchester City fans were left feeling emotional as Benjani pulled off his famous celebration in the Vincent Kompany testimonial. The former forward spent three seasons at the Etihad Stadium.

But injury meant the Zimbabwe forward made only 31 appearances, scoring seven goals.

Benjani, though, made those goals memorable with a unique celebration.

And the 41-year-old got to pull it out as he played in Kompany’s testimonial match.

In the clip, there are two minutes left.

City Legends are losing to a Premier League legends side 2-1.

Nigel de Jong puts a free kick into the penalty box from just over the halfway line.

And Benjani, a second-half substitute, climbs highest to get past Shay Given.

As the crowd goes wild, the forward pulls out his celebration. 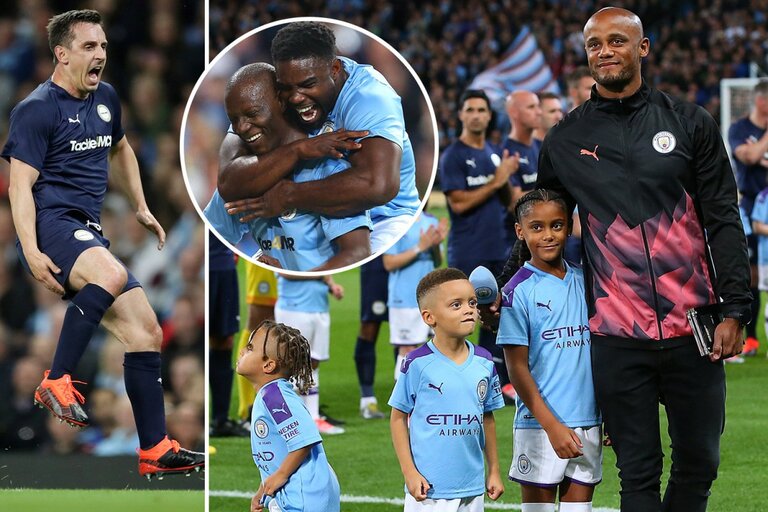 The 41-year-old throws his pointed finger forward three times before moving his arm across his body.

This footage has been viewed nearly 50,000 times within minutes of publishing.

And the City faithful were blown away to see it again.

“That was a throwback,” one said.

Another commented: “If you’re a real fan, you know.”

While a third could not hold back their emotions.

“Tears in my eyes. Premier League legend,” they said.

And a fourth added: “Benjamin, there’s tears in my eyes.”

With a fifth saying: “That Benjani celebration brough back serious feels.”

It comes as fans of rivals Manchester United begged Robin van Persie to return after his stunning goal.