This afternoon I flew from Harare to Cape Town on the only available direct flight on this route, the RwandaAir, Kigali-Harare-Cape Town flight service. 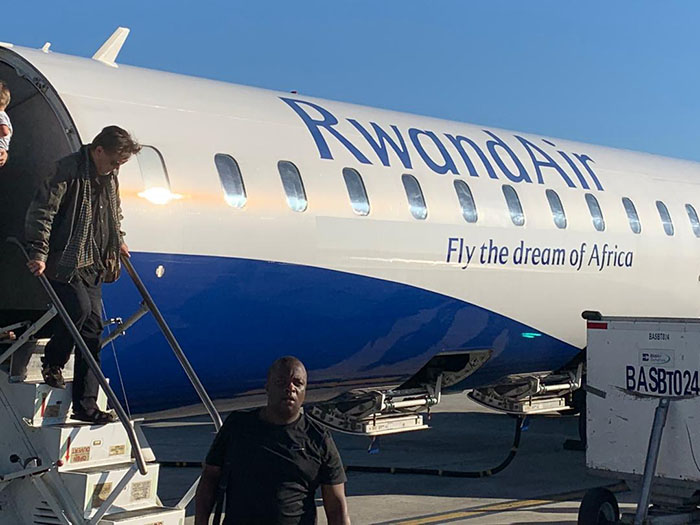 This packed flight once again reminded me of the tragic failure of political leadership in my country, Zimbabwe.

Rwanda was a genocide war zone 25 years ago, today it has become the poster child of African development and meritocracy.

Paul Kagame is not a democrat, he has never pretended to be one, but unlike many face powder democrats on the continent, and in Southern Africa, Kagame get things done.

He is building hospitals, schools, public infrastructure, and attracting huge local and foreign direct investment which is helping his compatriots forget about the past and focus on the future, a brighter future I must add.

Where Rwanda lacks on electoral democracy, Kagame makes up with local and foreign direct investment, and public sector infrastructure development.

Back home in Zimbabwe, we have ZANU PF that has been in power for 40 years, Vari Kurima Nzara, and they have thrown the country back into the 1950s.

The economy is lying on the floor in comatose, the past two and half decades have been a time of penury for Zimbabweans.

There are no medicines in public hospitals, no clean running water, no jobs, no passports for those who want to escape this hell on earth.

We have no decent roads, no Rule of Law, no decent salaries for the few who hold a job, no fuel and no electricity, the list goes on.

All this is evidently down to one set of things, Corruption, Incompetence, Nepotism, Theft and Mismanagement.

Treasury officials can’t even account for billions of tax payer dollars, and when they are brought before parliament, all they can say is “…we are sorry, we promise we will do things differently next time.”

Similarly, this has been President Emmerson Mnangagwa’s clarion call since getting into office, a clarion call which unfortunately is now comical and sounding like the broken record it has become.

“This is a New Dispensation, this is a Second Republic,” Mnangagwa bellowed at his election rallies on 2018.

He even reached out to those doing well in the region, leaders like Paul Kagame of Rwanda.

Rwanda sent their trade officials to Harare to share their own experiences, but alas, one year later, Mnangagwa is resisting implementing the required Political Reforms that would attract new investment, and unlock fresh international loans for public infrastructure development.

No serious business investor will come to a country without the Rule of Law, where private businesses can be invaded by the President’s political cronies at will without any legal consequences.

No businessperson will come to a country where the President’s Security Minister and chief enforcer will write a letter authorising the violation of a court order.

These are self imposed sanctions that will not go away until the President starts implementing and following the country’s constitution.

The president appointed various committees to help him with his work, a laudable gesture at the time.

These included his own Presidential Advisory Council, presumably made up of people of good repute, but also including known business rogues, a sign that change was not coming, not as yet.

This was meant to hoodwink the international community by putting a veil of professionalism to the Presidency, and a deceitful uptake in world standards, putting mascara on a tree to create a false illusion, whilst continuing with business as usual!

The President’s security forces continued with their 40 year history of violence, abductions, torture and impunity, one area that this government has no competition in the region.

His State media continues with its well known history of abusive articles against anyone perceived to be anti-government.

I have been called names rooted in lies and smear in the Herald by the President’s spokesperson, George Charamba, a sign of intolerable arrogance.

This week the American Ambassador, Brian Nichols and comedian, Gonyeti, have joined that illustrious list of State media abuse!

When all this happens, nobody from his Presidential Advisory Council publicly puts his or her hand up to say NO, this is wrong.

They pretend that they will talk to their man quietly, but we all know that they are just a political ornament there to give a false image of respectability to the Presidency, it is a political mirage that was debunked before it even spend Sic months advising the President.

The world stands in aghast watching those in his Presidential Advisory Council lose their respect daily as they soil their professional standing home and abroad, by being part of this daily well planned dishonourable acts of violence and impunity being authored by their boss!

Some don’t care because they went into it for themselves, we knew this from the onset, but those who pretended to be different are non the less losing their respect as well, both home and abroad.

Whenever we talk about Political Reforms, many inside Government and ZANUPF pretend that they don’t know what this means, Political Reforms simply mean adherence to Zimbabwe’s constitution.

This doesn’t need any money to do so, it simply requires political will, and a patriotic desire that puts national interest ahead of power retention, and financial self enrichment!

The fact that President Mnangagwa and his government are refusing to follow the constitution means that we now have a tragic crisis of governance, and some would legitimately argue that we have a constitutional crisis.

The President and his deputy, General Constantino Chiwenga, got the masses to march and support their military coup against Robert Mugabe because they mentioned that things were bad in the country and that we needed to change course.

Change course they haven’t done yet, and based on what the world has seen since the coup, they still won’t.

They continue to implement methods of the past, and in many instances, their human rights record is far worse than under Robert Mugabe, with day light street military killings, abductions, torture, rape, police street beatings and general violence against the citizen.

All these despicable acts of violence and human rights abuses are underwritten by a corrupt and thieving set of cartels that operate willingly in and outside of government.

These cartels have been building personal financial fortunes for those in power.

These crooked business cartels are fronted through the business surrogates of the political elites and by buccaneer businessmen.

Those of us who speak out are labelled “enemies of the State,” yet the President pretended before the elections of 2018, saying that every citizen should have the right to speak and contribute towards the national discourse for the good of the country.

Zimbabweans and the world are not asking Emmerson Mnangagwa and his government to do anything new or extraordinary, they are being asked to simply implement their election manifesto, a manifesto which is made up of the values and principles that they ran their election campaign on.

They promised daylight, and yet they are delivering night, pitch dark night for that matter, laced with thunder, lighting and massive rains.

Yet the citizen stands economically naked and alone waiting to meet the next day, that is if the next day ever comes at all.

I say so because the majority of our people rely on public hospitals, these health facilities have NO medicines for citizens, they have been turned into death traps by the actions of the political elites.

They are manned by underpaid doctors and nurses who simply write drug prescriptions dishing them out to sick men, women and children with NO cent in their pockets.

As this is happening, the government’s Auditor-General is telling us that millions and billions of dollars are being stolen daily from government.

Yet the President and his corrupt and incompetent government blame sanctions for our empty hospital pharmacies and failure to pay the few compatriots who are lucky to be employed in government.

I sit here on this flight next to a lady reading the Herald newspaper, it is reporting that soon the President will be addressing a choreographed anti-sanctions march by his party faithful and hangers-on who obviously benefit from the economic morass that he is presiding over.

Sane citizens will stay at home because they know that it is corruption, incompetence, nepotism, theft and mismanagement, and not sanctions that have authored our economic demise.

They know too that it will only take adherence to the constitution by the President for these sanctions to go away.

But alas, there are adults that will march on this day, writing themselves into the comical side of this country’s political history.

They would rather the President and his sidekicks continue to abuse the constitution without any consequence.

They really don’t care about the billions that are being looted and salted away into tax and rogue financial heavens by the political elites and their cartels.

They also really don’t care about the stolen government money that is used to build mansions abroad and buying Bentleys and Rolls Royces which are being driven on the potholed roads of Harare.

Whilst all this is happening, RwandaAir has opened a Kigali-Chinese route, whilst we are being misled, others are marching ahead with economic progress that we can only dream of!

But my fellow compatriots, remember that dreams can come true, but only if you work towards their fulfilment through effort and not pointless marches meant to deceive the world.

The march will be as hollow as the idea that sanctions will go away through marching in Harare, instead of implementing the constitution.

So much for a country that prides itself on being an educated nation!

We stand here today witnessing the violation of the very principles and political foundation that underpinned our liberation struggle against any kind of supremacy.

We are bearing witness to counter revolutionary acts by a predatory and greedy elite few, at the expensive of a suffering majority!

We, the downtrodden majority have non but ourselves to free us from this political misery and economic hell!

The perpetrators of these inhuman acts of violence and economic injustice will not stop because they have no reason to as long as they continue to prosper and profit from our suffering.

My flight has landed, so I have to go, have a good day wherever you are!

He is a Harvard University Nieman Fellow, CNN African Journalist of the year and CNN Television Journalism Fellow.

He is also a Fellow at the University of Oxford’s Africa Leadership Institute.

The late superstar Oliver Mtukudzi wrote the sound track for State of Mind.

You can watch the State of Mind trailer below.

Hopewell Chin’ono: What are Political Reforms and why are they important for Zimbabwe