Fifteen-year-old Lizwe (not her real name) dropped out of school just before her grade seven examinations. 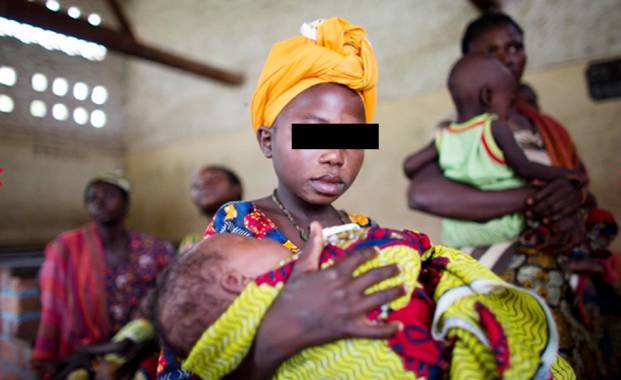 After the derailment due financial constraints, she found solace in marriage.

At 15, she got into the demanding matrimonial space and is now a mother of two.

A tale of a child with her children, the two look up to her for their upkeep.

Lizwe, from Champamanda village, Siyachilaba in Zimbabwe’s Binga district is among the nearly 5,3 million facing food insecurity in the country.

“Getting married was the only option after my grandmother failed to pay for my grade seven examination fees,” she opens up.

“My husband is not employed and I have to fend for the family. We have not had a good yield for two years now and we struggle to get food. I sometimes move around doing menial jobs for people in exchange for food,” chronicles Lizwe.

Vagaries of climate change that have seen Binga district witnessing a persistent drought have not spared young mothers like Lizwe. The crippling drought has left her struggling to survive each day.

Sometimes she has no idea where her next meal to feed her family will come from, with wild vegetables, fruits and roots constituting the bulk of her meals.

“We survive on wild vegetables and sometimes we take these without any starch,” she narrates.

Just like Lizwe, most girls in Binga district fail to reach their full potential when they get into early marriages.

Early marriages have been blamed for perpetuating the cycle of poverty and an increase in both maternal and child mortality.

“I live with my grandmother and she had no money for my secondary education. The other challenge is that the nearest secondary school is more than 20km from home so I was not motivated at all to walk all that distance,” adds Lizwe.

Child marriage has been identified as one of the impediments to girls’ emancipation, a situation that limits their potential to excel in life.

Despite Zimbabwe criminalising all marriages below the age of 18 in the 2016’s Constitutional Court ruling, several underlying factors have meant that child marriages have continued under the radar.

Several factors have been associated with child marriages in Zimbabwe, key among them being, poverty, religious and cultural beliefs, lack of comprehensive sex education.

Binga District Administrator Banda Ndeti says early marriages such as Lizwe’s were common despite the Constitutional Court ruling that outlaws such.

“The early child marriages, we have a number of our areas where we have a lot our young people getting married early due to varying push factors ranging from poverty among others.

“As early as 12 years, they are married off. Poverty, food insecurity has seen young girls getting into marriage. There is increased numbers in school drop outs due, most girls fail to access education and end up getting married.”

Banda says they have engaged traditional leaders to address the challenge citing that underlying factors such as poverty reverse gains for such campaigns.

“Our chiefs are working on it and engaging the members of the community to create awareness on the need to keep the girls in school, ensure that the girls are empowered. We are working with traditional leaders to address this challenge.

“It is also critical for the country to also address underlying factors associated with child marriages. At the moment the district is facing a serious drought that has plunged the community into abject poverty.

“Climate change has resulted in a massive school dropout, Government is helping with education support but we have a lot of drop outs due to the effects of climate change. The distances travelled to school are also a challenge. At the moment we have 125 primary schools and 45 secondary schools for the whole 25 wards in the district. So the secondary schools are inadequate for the wards, this is a challenge for the districts.”

A headman from Champamanda village, Buyani Sijamba says it was very unfortunate that the early marriages have seen girls in the area failing to break the cycle of poverty within families as the girls never get to realise their full potential.

“It is very sad, girls are married at early ages. They never get to finish school and that way the cycle of poverty within families continue. Poverty is the greatest challenge the district is facing and the persistent drought has not helped the situation in any way.”

An organisation supporting nutritional programmes in Binga district, Save The Children notes with concern that mothers from child marriages constitutes the majority of their beneficiaries adding that despite the law, child marriages remain rampant in the area.

Save The Children notes with concern how food insecurity in districts like Binga had potential to derail developmental gains the country has made over the years citing that Sustainable Development Goal 4 which seeks to ensure inclusive and equitable quality education for all was under threat.

“We have been operating in the district for a while now, with various programmes such as nutritional in bid to curb malnutrition in children. Mothers from child marriages constitute a majority of the community we assist.

“These young mothers should be in school but the rate of school drop outs especially among girls in this district is alarming.s

“It is very disturbing really these children become mothers at a very tender ages. Their babies are vulnerable to malnutrition as well. Even after the country outlawed child marriages, these remain rampant in this district,” says Save the Children, Communications and Advocacy Advisor Sophie Hamandishe.

Zimbabwe is one of the countries that committed to ending child marriages by the end of 2020, under the Ministerial Commitment on comprehensive sexuality education and sexual and reproductive health services for adolescents and young people in Eastern and Southern Africa.

Internationally, Zimbabwe has ratified and is party to, conventions that protect children against child sexual exploitation and abuse, including child marriages.

These include the Convention on the Rights of the Child and the African Union Campaign to End Child Marriages (launched in Zimbabwe in July 2015). At regional level, is the SADC Model Law on Eradicating Child Marriage and Protection of Children Already in Marriage which was adopted by the SADC Parliamentary Forum Plenary Assembly in 2016.

A legal think-tank, Veritas Zimbabwe argues that child marriages are both a symptom of poverty and a conduit through which it is perpetuated.

“Despite the good laws, underlying factors such as poverty push girls into early marriages. By getting into early marriages, girls fail to further their education which is an essential tool in changing one’s economic status thus breaking the cycle of poverty.”

Child marriages need more than just laws to curb but a whole structural shift that discourages society from contemplating them.

Zimbabwe had made progress but the food insecurity gripping the country may prove to be retrogressive. The Chronicle